April promises to be busy and exciting at English Heretic. Just a brief update of things that were, things that are and shall be.
On a personal note, I've completed my final exam for the msc and will be starting my project. The project will involve the development of  a computational tool to mine omic and mri data from Alzheimers studies.
In addition to this, Wyrd Tales 2  is coming together and  Iam starting to put together the layout. A CD will accompany the book - a single long piece, that is taking shape - ritualistic and surreal, using heuristic field recordings... think psychoprography... I'll be posting up the book contents in the near future.
I've been invited by Fortean Times to cover and take part in the Sonic Weekend at Buxton, which is happening on 8th/9th/10th April.
Finally, in honour of  the Royal Wedding, we will be releasing a commemorative recording. More on this exciting venture soon.
Posted by Dr. Champagne at 08:55 4 comments:

The delicious Strange Attractor Journal 4, edited by my pal Mark Pilkington is now out. It contains wonderful pieces by Gyrus, Stephen Grasso,  and Ken Hollings amongst many others. Iam delighted too, to have an essay in there. Order from Strange Attractor here.
Posted by Dr. Champagne at 02:43 No comments:

Some may say brutality, others rigorous discipline

Martin Jones, author of the enjoyable Psychedelic Decadence has a fine new 'zine out called Bedabbled! The first issue is loosely themed around the subject of deviant children in film. It contains articles on Blood On Satan's Claw" and the film Bloody Kids, which is described as social realism meets horror. The next issue will be on the subject of the Cult of Satan. Martin is also happily contributing a piece of speculative fiction to Wyrd Tales 2.
Violence and childhood, with BOSC as the prime metaphor continues to provide creative nourishment. There is also much interest and controversy, in neuroscience, concerning the development of the Hypothalamic Pituitary Adrenal axis in children suffering maltreatment.


Briefly summarised, the HPA axis is responsible for the mopping up of cortisol which is released by the adrenals in response to stress. The work of Michael Meaney on generations of rats separated from their mothers has demonstrated loss of  expression of the genes that code for receptors that modulate the HPA axis feedback loop. In other words it has been proposed that early trauma can switch on an epigenetic program that blunts the mechanism for suppressing stress, leading to a whole range of psychopathologies. It's a controversial theory, but of particular interest when one looks at the case of Mary Bell (inspiration for Angel Blake in BOSC), and the whole notion of violence in childhood that Bedabbled! explores.
Along with Witchfinder General, BOSC is a horror film, despite itself, that has big themes at its core. William Burroughs once said that when reading a book, he would ask himself, does it explore the big themes, and employed this as its critical marker. Budget compromised, BOSC certainly does, and irrespective of its less than integrated plot, holds power for this reason.
Perhaps the nature of the HPA axis was intuitively apprehended by medieval philosophers, when one considers Hippomanes. A piece of flesh on the forehead of a new born colt, it was said that unless the mare herself partook of the hippomanes, she would never after love her foal, or let it suck. The key behavioural traits of grooming and licking are found to be absent in rats with blunted HPA axis response.
The issue of violence and youth is a recurring imaginal thread.  On a recent trip to the war cemetery at Shotley, I met a chap who was conducting a tour of the graveyard. We got talking in the church about HMS Ganges, the naval school nearby. Chatting about the history of the school, we got into a discussion of the Victorian methods for handling urban migration and in particular, what to do with unruly youths.
"Of course Ganges was known for its rigorous discipline", he cautiously remarked.
"Brutality, you mean?" I responded
"Some many say rigorous discipline, others brutality."
The tour guide then went on to mention the lunatic pauper hospital at Melton, near Woodbridge, St. Audry's. The previous week there had been reports in the papers that graves at the hospital chapel had been excavated and three of them left exposed for a number of months. Naturally interested, we popped over to Melton the following day to explore the place. Much of the hospital buildings are listed and the entire complex has been converted into a huge housing estate. Even the mortuary and one of the chapels are now homes for the professional class. The graves, alas, had been earthed over since the media coverage, but there were nevertheless some bizarre juxtapositions of psychiatric hell and domestic idyll, to enjoy. A small children's playground overlooked the chapel cemetery, a child's football kicked over a conservatoried garden lay among tombstones - altogether, the hackneyed disaster scene of a tabloid photographer's dream.  Only the scene, I  suggest, is  of a psychic disaster of tomorrow; one  awaiting the inhabitants of this housing estate on the borderland.
The whole place had the air of the opening scene of John Carpenter's Halloween. Indeed, there was even an incredibly creepy Willow tree on a grass bank in front of the former Male Block of the hospital. The tree had a huge growth in the centre of the trunk, with a face carved on the growth.
I suspect, and hope, future horror films will be liminal events in which we will play active  roles. Media control of huge budgets dictates that we must cast ourselves like the psychedelic and ontological pioneers of the 1960s into the  the roles of directors, heroes and victims of our own psychic B-movies.
The next musical download from work in progress is based on an extrapolation of Robert Graves' theories of the Triple Goddess and its relation to Blood On Satan's Claw. The track is provisionally called The Dangerous Gift, the title  taken from a poem in Graves' essay,  Intimations Of The Black Goddess. The lyrics were written in collaboration with the artist and curator, Kate Renwick, and explore the idea of the sacrifice of the Poet by the Muse and the Wyrd. The imagined venue for the sacrifice being the ruin of St. James church at Bix, location of the  ritual murder scenes in BOSC. An edited and remixed version will appear on the CD release coming along with the next English Heretic Collection.
I've also changed the title of the CD, it's now provisionally entitled Wish You Were Heretic.... a set of postcards from the excavated substratum of England.
Download  "The Dangerous Gift" here.
Posted by Dr. Champagne at 12:45 3 comments:

Tales of The New Isis Lodge 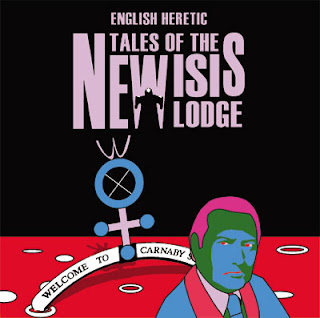 Back in stock, in time for Easter - go on treat the kids to something far more healthy and decadent than chocolate...
Available here
Posted by Dr. Champagne at 10:25 1 comment: