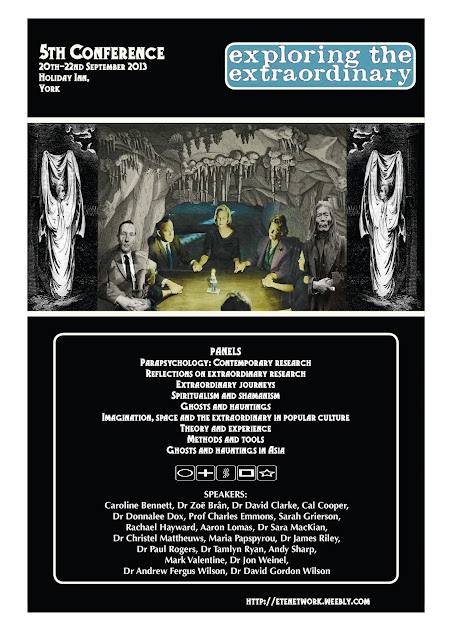 This weekend 20-22nd sees the 5th conference of Hannah Gilbert and Madeleine Castro's wonderful "Exploring The Extraordinary" event. There are plenty of fascinating talks lined up: Iam particularly looking forward to Mark Valentine discussing book hauntings, and to James Riley exploring William Burroughs' use of the tape recorder as a magical instrument.

My talk is entitled Fiction And Its Double. The title is a homage to Artaud's Theatre And The Double, and I'll be attempting to explain some of the intentions behind the last ten years of psychotic peregrinations and hyperbolic extrapolations. I'll be looking at the synchromysticism of James Shelby Downard as a key conceptual influence, Bob Black's polemic against the leisure complex as the moral molotov cocktail for English Heretic and James Hillman's psychology as a possible therapy for all this psychotic geography. I'll be using the latest project "Anti-Heroes" as a case study.  My argument is that just as Artaud called for theatre to rediscover its proximity to 'another archetypal and dangerous reality', we need to extend this call to arms to the theatre of our realities, and that we can do this by investing in the fictional charging of place, particularly by horror film and dystopian fiction: to up the ante on the civil war of historical sanity; in fact to up the ante on sanity itself.