Death To Fascist Insect That Preys Upon The Blood Of The People! 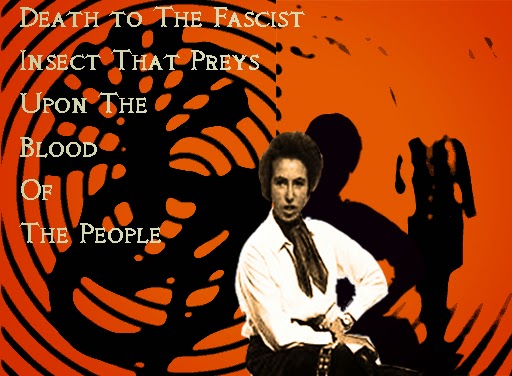 In the liner notes to Anti-Heroes I explained the conceit for the remixed extract of Plan For The Kidnap Of Princess Anne that appeared on the album. The remix was called The Mallian Timeslip as a nod to the Phil Dickian nature of what I perceived to be Ian Ball's cosmic paranoia. The addition of sparse drum machine and Floydian guitars was to re-imagine the track as the off kilter attempt of some out of touch prog rocker to get down with the kids – a spaced out anarchist protest song. In terms of the song's languid structure,  I was very much thinking of Peter Gabriel's Biko - I song (and sentiment) I love, and as a child Biko's death left a big impression on me. He died a few days before my 9th birthday. I was an avid radio listener as a kid and I still remember the news reports. Weirdly, Biko's death also fused in my memory with Marc Bolan's death - which happened a few days later, on my 9th birthday. These morning radio news items remain burned into the valves of the hippocampal transistor.

Since writing those liner notes, I've discovered an interesting connection between Ian Ball and Steve Biko, as well as some strange insinuations regarding the kidnap that suggest Ball was a cog in a grand master plan to initiate World War 3. As for my original assertion - that Ian Ball was a paranoid schizophrenic embroiled in a fantasy of revolution - I am not so sure now! The red sands of Martian conspiracy seem to be shifting beneath my feet, revealing a delirious sub plot in which I am not so sure of my own role.

It turns out that Ian Ball was defended by Sir David Napley, a very high profile "celebrity solicitor" of the 60s and 70s. Napley, as is perhaps is normal with solicitors, had a curiously ambivalent resume. He defended the Rolling Stones against their drug charges in the 60s, a London gallery for exhibiting nude photographs of John Lennon and Yoko Ono, and most famously Liberal party leader Jeremy Thorpe in his trial for the conspiracy to murder Thorpe's lover Norman Scott. If ever Alan Moore's League Of Extraordinary Gentlemen needed a solicitor to defend themselves in some hideous occultural miscarriage of justice, then I would recommend Napley.  However, Napley also appears to have been a champion of the underdog and the less attractive defence case, of which Ian Ball must be included. He defended Jeremy Bamber, who, in common with Ball, still protests his innocence via an obsessive website hosted behind the firewall of a high security prison. And most serendipitously, given the conceit of the track on "Anti-Heroes", Napley served as an independent witness into the inquest of Steve Biko. His report was instrumental in laying the blame on the South African police; Napley concluded, "I was left in no doubt Mr Biko died as a result of brain injury inflicted on him by one or more unidentified member of Security Police."

Just to seal Napley's credentials as the perfect participant in some wild forensic metafiction, he also worked on a miscarriage of justice case from 1967, involving a Newcastle gangland killing, by two Londoners - Dennis Stafford and Michael Luvaglio. The crime centred around the syphoning of profits from one arm bandit fruit machines. Stafford and Luvaglio traveled from London to kill one Angus Sibbett, who had been robbing from machines, set up in Newcastle nightclubs, by London "business" men. Sibbett's bullet ridden body was discovered in the boot of an MK 10 Jag. If the crime sounds like an underworld cliche, it is because the case provided the basis for Ted Lewis' book Jack's Return Home which was made into the film Get Carter.  But not content with dipping into the murky world of pulp archetypes, Napley's career extends as far was the icy waters of the Illuminati. He worked for the family of Roberto Calvi, God's Banker, whose assisted suicide still haunts the stanchions of Blackfriars Bridge, in London. Two images fuse: Get Carter – Michael Caine pursued over the high level bridge by henchmen in their doorless red Jag, and the police photographs of Roberto Calvi on the deck of Blackfriars, pockets laden by Masonic stones.
"St. Peter's not very happy about his car, he's going to shit all over you." 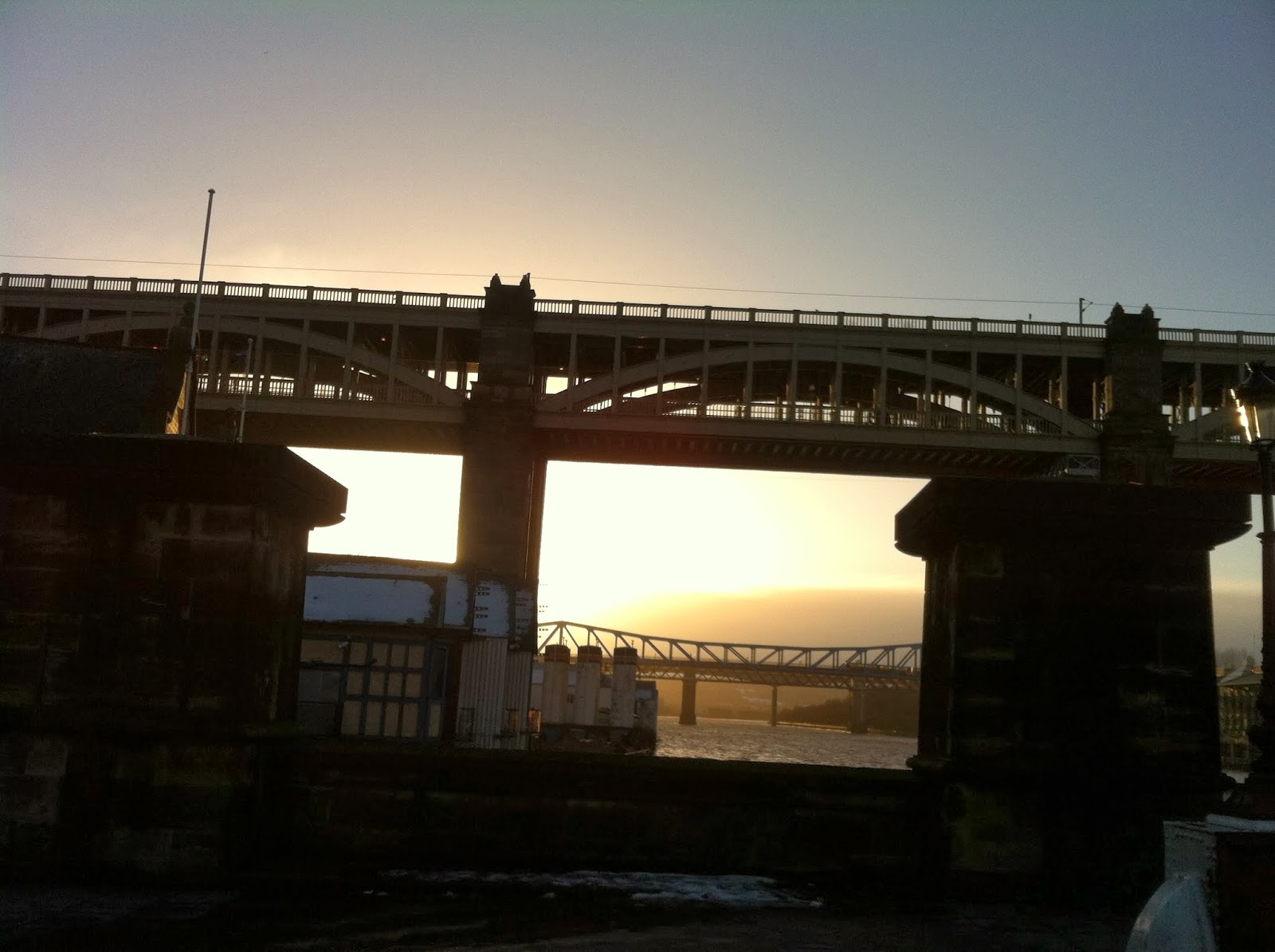 And if you're feeling unnatural pangs of sympathy for this champion of justice, Napley also defended General Pinochet - moral compass out of control...

Where this legal jackanory starts to get even stranger is when we get back to Ian Ball. In the booklet for English Heretic's last release, Mondo Paranoia, I discuss the hoaxed missing chapter from William Manchester's Death Of The President. This infamous hoax was published in the deeply subversive magazine The Realist. This magazine became a primary vehicle for the fascinating work of one Mae Brussell. Brussell is an example par-excellence of what I was trying to highlight in Mondo Paranoia: that the assassination of Kennedy was like some traumatic occult event that appeared to awaken a paranoiac pineal gland, and enabled certain folk to insight a frightening and amorphous new reality. It certainly seemed to serve that purpose for Mae Brussell: it is stated in her biographical notes that the,
"Complacent Beverly Hills housewife Mae Brussell had quite an awakening in 1963 when President Kennedy was assassinated, and again when she read and cross-indexed the massive 26-volume Warren Commission Hearings. She saw that the international terrorist network that had made up the Axis powers during World War Two had gone underground and continued their world-wide fascist campaign, overthrowing one country after another. America was not exempt."

* On May 29, 1968 she confronted Rose Kennedy at Monterey Peninsula Airport, handing her a note telling her that Robert Kennedy would soon be assassinated. A week later he was executed by Sirhan Sirhan.
* Two weeks before Patty Hearst was kidnapped, she addressed a Syracruse Univeristy audience informing them that the Symbionese Liberation Army's murder of school superintendent Marcus Foster was the beginning of a terror and psychological sabotage campaign, orchestrated by the government, and similar to that instigated in Nazi Germany during the 1930s.
* In August 1977, discussing the recent relocation of Jim Jones' move to Guyana, she speculated that it might be a training camp for assassination teams.

If Napley was a forensic everyman of some countercultural yarn, then Brussell was its prophetess.

The Symbionese Liberation Army was much the focus of Brussell's obsessions. In 1974, she wrote an article for The Realist in which she laid out the argument that the SLA was in fact the CIA, or rather ,a fictional terrorist group set up by the CIA to bring a fascist revolution in the United States. It's a frightening theory, especially for one cooked up by a once complacent Beverly Hills housewife. Analysing the kidnap of Patty Hearst, Brussell lays out the elaborate project of the fabricated SLA:

"The end goal of the SLA – World War III – is to plunge the Third World masses into starvation and slavery. We have accomplished this through the CIA in 77 countries. The Third World inside the United States is the next selected victim."

Then most incredibly, Brussell brings Ian Ball into the equation stating,
"Every kidnapping since February 4, 1974, should be carefully investigated. The kidnappings may be real, but the circumstances surrounding them are questionable.
The Secret Service, for the first time in U.S. history, presented an award outside the United States. It is no surprise this was delivered to Inspector James Beaten, the man who was wounded March 30 [sic] when Ian Ball was supposed to "kidnap" Princess Anne.
Was there any relationship between this altercation and the earlier abduction of Patricia Hearst? The Secret Service knows the answer. Were they acting accordingly, apologizing for a near victim in a provocateur-inspired event?"

So Brussell makes the fantastic insinuation: that Ball was a patsy or a brainwashed agent for a secret service operation on foreign land, and the copper inadvertently caught in the crossfire received an award from the United States as a covert apology!

And what of Princess Anne? If Ian Ball's kidnap been successful and, if it was an operation based on the blueprint of the Patty Hearst case, would Princess Anne later have appeared on the security cameras of a branch of Lloyd's Bank  - presumably on horseback  -  yelling at the tellers and brandishing an AK47. Would she later appear on some pirate radio broadcast intoning the paradoxical mantra of SLA leader, Donald DeFreeze,  "Death to the fascist insect that preys upon the blood of the people!"

In trying to retain a rational perspective on of all this, it's probably worth pointing out the following clipping from an American Daily on March 23rd 1974, in which the kidnap of Princess Anne appears on the same page as news coverage of Patty Hearst. 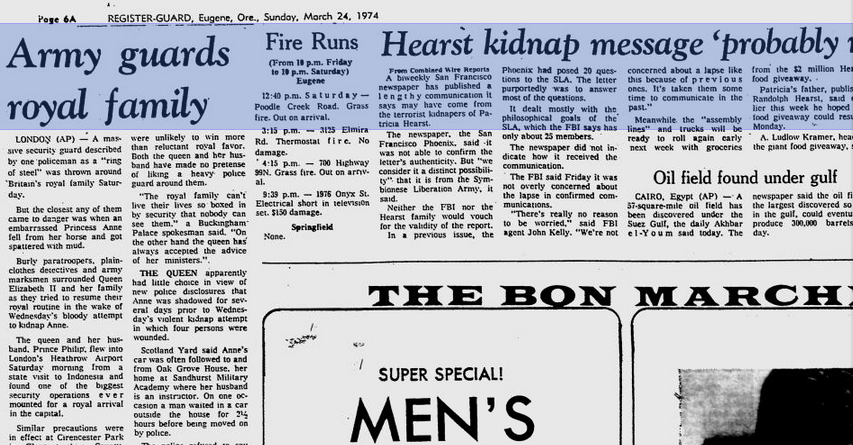 Finally, let us apply William Burroughs' technique for the paranoid reading of newspapers, which entailed scanning across the page so that the unrelated news items would fuse to reveal a new narrative...  Cut across reality and future conspiracies leak through. The headlines, cut across, read thus:
"Army Guards Hearst Kidnap Message: 'Probably Royal Family'"
Posted by Dr. Champagne at 18:48 5 comments: