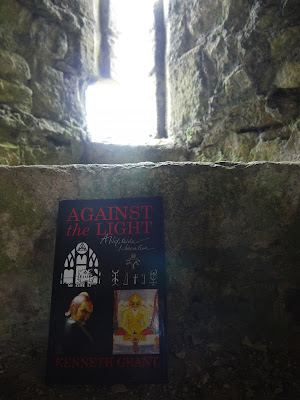 I knew the locality well, having visited it on and off since 1927 during childhood holidays. We strolled in the direction of Ewenny and the sand dunes of Candleston. A ruined manor-house, incorrectly described in guidebooks as a 'castle', nestled in a wastes of spiky grasses and pine trees. It was a 'day of the veil', as Machen would have described it; the sun, never quite penetrating a thin haze, neat down on the dunes a white glare of relentless heat. We ate sandwiches and refreshed ourselves with canned lager, after which Margaret slept and I strolled to the ruin. I entered it, recalling the far-off days when, as a boy, I had clambered to the first floor and perched upon a crossbeam. It was surprisingly little decayed, a little less firm, a little more eroded. I gazed out at the dunes through gaps in the walls; they still rolled on toward the sea at Ogmore, with its genuine castle, now little more eroded after the ravages of nine hundred years.

- Kenneth Grant, Against The Light

I spent the Easter weekend visiting a centre of occult pestilence, namely the vicinity of Bridgend in South Wales. Not only is Bridgend a youth suicide hotspot, but it is also the venue of some of the key scenes in Kenneth Grant's Nightside narrative, Against The Light.

The ruins of the fortified manor house, Candleston, feature heavily throughout Grant's tentacled mythos. Hecate's Fountain, in particular, prises open some of the workings of the occultist's enigmatic New Isis Lodge. Most irreal and outlandish of the rituals described therein is a ceremonial copulation between a gossamer winged dancer of the lodge and the Mayan vampire god Camazotz.  The supposed venue for the rite is described as the crypt of a derelict chapel in Wales - procured by a member of the secret organisation of the Zotzil. Candleston, as mentioned in the preliminary quote to this article,  more explicitly features as the venue for the discovery of a grimoire in Against The Light.  It's an amazing structure, a ruined Escher, like a more Baroque version of the church of St. James at Bix, used for the ritual scenes in Blood On Satan's Claw. 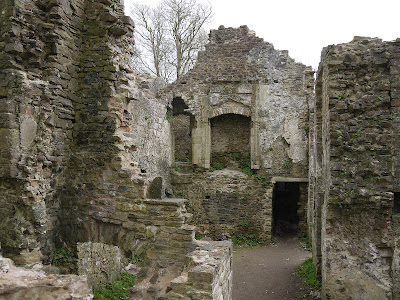 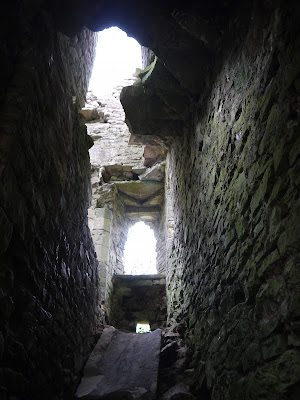 The 'genuine castle' mentioned in Against The Light impressed me equally.  Even when I was there, I sensed an air of  the violence eroded splendour of Gilles De Rais' Tiffauges or De Sade's castle at La Coste. Its crumbling facade put me in mind, more explicitly, of Man Ray's Imaginary Portrait of Marquis De Sade - where tyrant and fortress are wonderfully made simulacra. 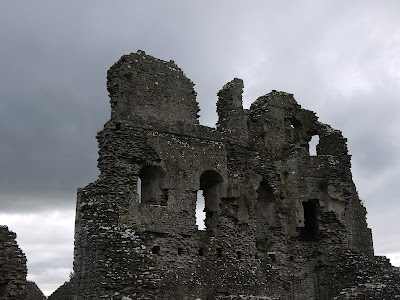 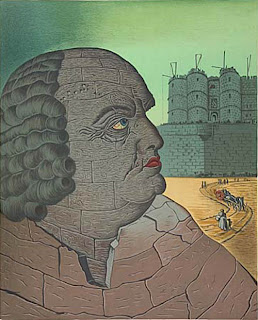 I was glad then, when doing some follow up research into the suicide epidemic around Bridgend, that my intuited sense of medieval butchery had not escaped other visitors to Ogmore. In this deliciously overwrought piece of reportage from Vanity Fair, the journalist shares my vision,

Occasionally I glimpse the ruins of a high-walled Norman castle on a hilltop. Impaled heads were probably displayed on the ramparts back in the day, I think. A lot of blood has been spilled on this land. A lot of un-laid-to-rest souls could still be roaming around, if you believe in that sort of thing. The Vikings stormed through Bridgend, after the Romans, and before the Normans. The Welsh have been repeatedly conquered. They are a half-assimilated island in an English sea, like the French Canadians of Quebec, who have one of the highest suicide rates in the New World. Centuries of oppression have built centuries of resentment.

The article goes on to discuss the 'work' of an Anglican psychiatrist Kenneth McAll, who espouses the theory that the mentally ill are being tortured by their dead ancestors. Therapy in McAll's view is best achieved by identifying and liberating the malevolent revenant through performance of the Eucharist.

Curiously reminiscent of some of English Heretic's absurd conceits, the reporter for Vanity Fair posits,

The idea that these kids killed themselves because they were all mentally ill and being tormented by their ancestors, or possessed by marauding spirits, seems pretty far-fetched, but could these suicides not represent some kind of an atavistic response to the shittiness of the lives they have been presented with? What is this “other side” they tell each other they will soon be meeting up on? According to the British writer A. Alvarez’s The Savage God: A Study of Suicide, which traces the shifting cultural attitudes about suicide through history, the Druids—the magico-religious caste of the Celts, their polytheistic, animistic high priests and nature mystics—actually promoted suicide as a religious practice. They had a maxim, Alvarez relates: “There is another world, and they who kill themselves to accompany their friends thither, will live with them there.”

The 'other side', of course, figures in the final poetry of Robert Cochrane, himself the practitioner of a neo-Druidic summer solstice self-sacrifice.

Cochrane penned the warning line "I'll soon be hunting from the other side, castles of sorrow and hills that rise" to his mentor William Gray, shortly before his demise. Cochrane's desire was that after his death his head should be cut off and placed between his knees. But his widow with ironic revenge -  that only a long suffering spouse could dream up  - saw to it that he was buried in an unmarked grave in Slough, the service conducted by an Anglican vicar... presumably employing a Eucharist to cleanse Cochrane's demonic lethal program.


Ogmore castle has the very visage of sorrow. 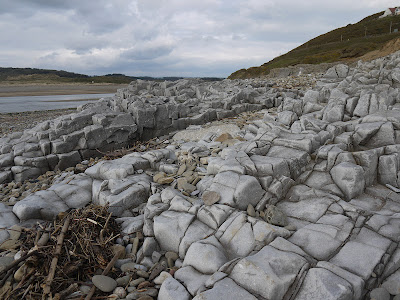 The beach at Ogmore has great cubist fingers of limestone -  the marauding hands of Man Ray's De Sade, edging toward the sea. There is something occult about their geometry, putting me in mind of Pete Smith's renditions of Lovecraft's cyclopean geology.  A child and his father were watching a guy paddle surfing - allowing me to frame the landscape in some kind of post-energy science fiction context. I like these glimpses into a dystopian parallel, a world depleted of resources  - maybe we are already there, but like Ragle Gumm, some vast conspiratorial experiment is obfuscating us from our reality. 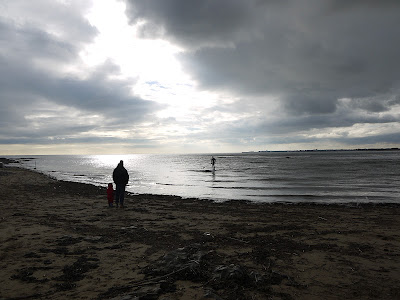 I came across this (see below) strangely porcine piece of driftwood. I had hoped to take it home, but it was too big to fit in the car. Note: for future forages, I must take an axe with me - if nothing else the affectation of obsessively chopping at salvage will cast me into the role of post-apocalyptic shaman. Since visiting Wells-Next-The-Sea for the recent M R James documentary I've become taken with the idea that dead wood is a great sculptural metaphor for the manifestation of nature spirits or, more to the point, nature demons. This driftwood pig's head calls to mind Chozzar, from which I suspect Choronzon is a corruption.  Blavatsky imagines that Chozzar was a pig god worshipped by Atlantean magi. Interestingly Chozzar, for the Peratae Gnostics was synonymous with Neptune/Poseidon. Hence it would seem, much like Haunted Shoreline's fantastic ongoing discoveries, this driftwood deity is an offering from the deep.

Funnily enough, when I was searching for references to Chozzar, I found myself back at my own blog, with this dream I recorded a few years back discussing vampirism in nature! It would seem I am regurgitating my own subconscious offal, a reverse form of alchemy, in which one wallows deeper in one's own anti-spiritual cess. 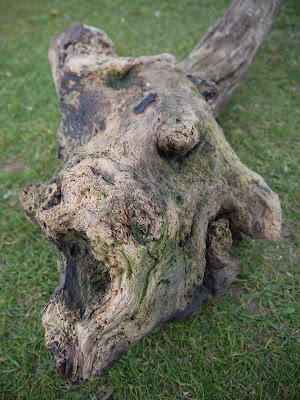 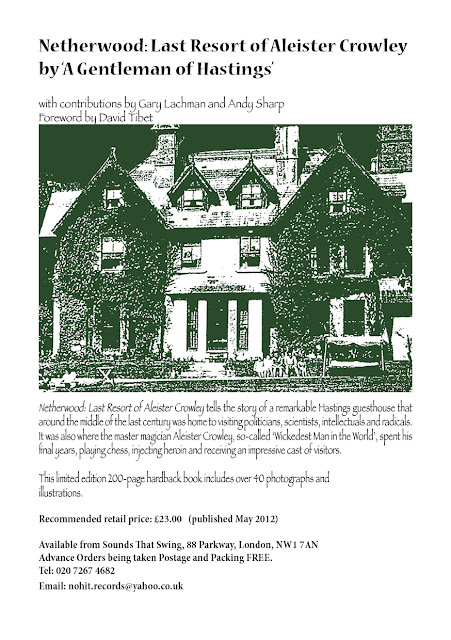 Netherwood: Last Resort of Aleister Crowley tells the story of a remarkable Hastings guesthouse that around the middle of the last century was home to visiting politicians, scientists, intellectuals and radicals. It was also where the master magician Aleister Crowley, so-called ‘Wickedest Man in the World’, spent his final years, playing chess, injecting heroin and receiving an impressive cast of visitors.

Netherwood features a chapter by Gary Lachman and a foreword by David Tibet.
Antony very kindly asked me to contribute a chapter to the book. My chapter discusses the influence of Kenneth Grant's relationship with Crowley on Grant's magick and otherworld view.
As mentioned previously Antony will be providing a talk at the forthcoming Night Of The Demon event at the Electric Palace.

Tickets are now available for Night Of The Demon and can be purchased here
Posted by Dr. Champagne at 15:17 No comments:

Coming soon! Night Of The Demon At The Electric Palace 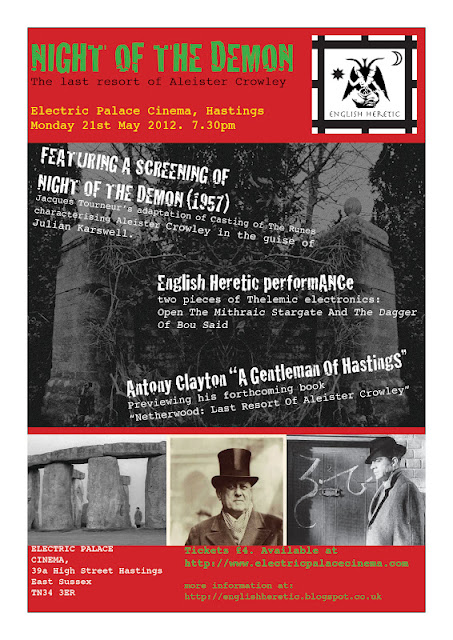 Night Of The Demon: The Last Resort Of Aleister Crowley
Electric Palace
39a High Street
Hastings
East Sussex
TN34 3ER
Monday, 21st May. 7.30pm – 10.30 pm
The wonderful Electric Palace cinema plays host to an evening of applied Crowleyanity, featuring a screening of Jacques Tourneur's Night Of The Demon, a preview of the forthcoming book Netherwood: The Last Resort Of Aleister Crowley and a live performance by the creative occult organisation, English Heretic.
Night Of The Demon (1957)
Jacques Tourneur's adaptation of M R James' Casting Of The Runes famously characterises Aleister Crowley in the guise of Julian Karswell – a top hatted, mansion house dwelling, mummy's boy whipping up demonic winds from runic spells. Operating a Satanic cult, inculcating imbecile murderer Hobart with occult psychobabble, Karswell is the perfect celluloid archetype of the avuncular black magician.
English Heretic
A live performance of two pieces across the Thelemic axis of English Heretic's catalogue:
Open The Mithraic Stargate – a ritual electronic rendering of Mithraic Liturgy. Refracted through Crowley's disciple Kenneth Grant's ufological lens, this gnostic hymn purports to contain noless than the formula to initiate rapport with the Outer Ones of Lovecraftian Lore; The Dagger Of Bou Said – a desolate metal soundtrack to the reading of Crowley and Neuberg's encounter with the demon of the Tenth Aethyr, Choronzon.
Antony Clayton – Gentleman of Hastings
As a taster to the forthcoming book Netherwood: Last Resort Of Aleister Crowley,  Antony will be taking the audience on an annotated guide to the remarkable guesthouse where the “Wickedest Man In The World” spent his final years, playing chess, injecting heroin and receiving an impressive cast of visitors. A unique memoir of place and person Antony's “Netherwood” is soon to be released in limited hard back edition, including over 40 photographs and illustrations.
Tickets £4 Limited seating!
Book from the electric cinema website
Posted by Dr. Champagne at 14:41 1 comment: 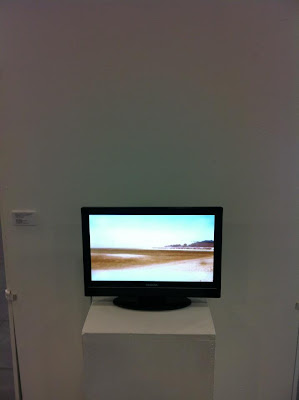 The documentary of "Bleak And Solemn... The hauntological landscapes of M R James" is on exhibition at The Waterfront Building, Ipswich, as part of Atrium Studio's exhibition at UCS. It's in the foyer and the exhibition runs from 2nd to 16th April. More details here
Posted by Dr. Champagne at 10:03 1 comment: