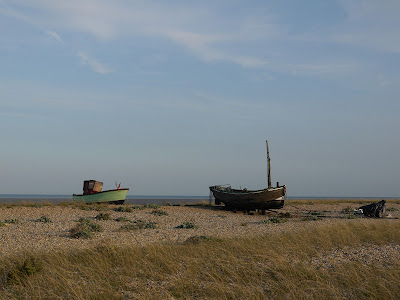 I've posted a few blog entries over the past year or so under the title of The Actophile Society. I think the concept arose from The Dunwich Tapes stories that appeared in Wyrd Tales 2. However, the beach as harbinger of  rich archetypal, hermetic and surreal imagery has been already been perfectly realised by The Haunted Shoreline blog. The Haunted Shoreline's most recent entry unearths a rock that bears an uncanny resemblance to Dali's Accommodations Of Desire. In Cults Of The Shadow, Kenneth Grant makes a memorable connection between Dali's magical fetishism embodied by that painting and Spare's Alphabet of Desire. Grant asserts that Spare's system of correspondences between the inner movements of sexual impulse and the outer form of its manifestation equates to Dali's accommodations of desire - which are visualised as shadowy voids each having the shape of the ghostly object which inhabits its latency.
Posted by Dr. Champagne at 16:56 2 comments: 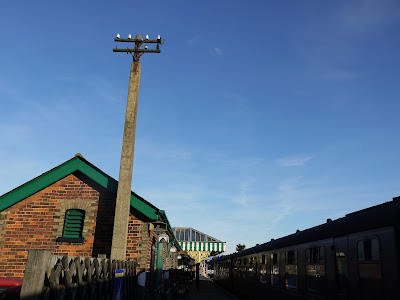 Sarah Sparkes' highly stimulating creative research project GHost returned to Senate House on leap day for its 6th event. The first of two complementary hostings to explore the relationship between landscape and manifestation, it featured contributions from Sharon Kivland, Laura Ellen Joyce, Hayley Lock, and the first outing for Eerie Anglia. Sharon's contribution was a set of imagined holiday photographs from Freud's brother's collection. Laura presented her work in progress – a discourse on the perverse collision of idyllic landscape and violence in Ovid's Metamorphoses. Hayley's piece was a mixed media performance taking readings from the rather disturbing letters of a pathologically infantilised John Ruskin. Eerie Anglia (Mark Fisher and I) screened a documentary based on Mark's essay “Bleak and Solemn: the hauntological landscapes of M R James”.
Particularly interesting for me, as the event progressed, was the emergence of intriguing imaginal correspondences between each of the presentations. It's actually a testament to the intelligence and depth of the GHost project that the night was able to project this poetic layering of meaning. Also inspiring was the post presentation question and answer session - brimming with passionate discourse.
Sharon's postcards were witty and ambiguous souvenirs of Freudian neurosis and the phantoms of false memories that plague regression therapy. We were told that Sigmund suffered an irrational fear of steam trains. Through analysis he was able to overcome this phobia, eventually able to enjoy railway holidays. Were the photos a fabricated remembrance of things that were not – I enjoyed the fantasy they were fictions. The archetypal psychologist James Hillman famously rebranded the careers of Jung, Freud and Adler as fiction writers in the genre of healing. Sharon's photographs were a testament to Hillman's assertion.
The steam train itself becomes a psychosexual ghost, emerging like a night demon from melodramatic plumes. But more than this, Sharon's slides elucidated the railway station as an archetype of haunted landscape. During the making of our documentary and the construction of the essay, Mark and I visited Sheringham railway station, which was used in Peter Clarke's version of a Warning To The Curious. The station is a heritage show station – lovingly preserved as a museum, a simulacra of a 1930s world, but also a dream station, one waiting to be inhabited by the alabaster succubi of a Delvaux painting. James' neurotic bedsheet spectres become classical statues.
Indeed there was an interesting post-presentation discussion on artistic use of the fairground ghost train. The analogy that came to mind for me during these discussions is that our desire to revisit and in a sense reactivate haunted landscapes serves up the same wonky thrill as clattering through the creaking doors of the ghost train ride. It's not a flashy augmented reality, but one in which reality is deconstructed in an uncanny yet sobering way – such that we can at least glimpse the clapboard facades that make up our already augmented realities. It's a meditative ritual to strip away the thrills and actively experience loneliness.
This is particularly true when visiting film locations – we obtain an insight into the magic of the cinematic framing of a scene, and this gives us a very real temporal and spatial jolt. I suspect that jolt is one of recognition: that our reality is as artificially constructed as a film set – what the Buddhists term a Lila, a masque, or play. Visiting film locations has the same effect as hearing the original source of a sample after hearing the sampled song – time plays backwards, but also our cultural appropriations are laid bare.
The abundance of web sites and DVD extras dedicated to documenting film and TV locations, often in near forensic detail – like crime scenes in reverse, they are abandoned by their former dramas – I hope is less a nerdish obsession than a pilgrimage. Paul Devereux, in Living Ancient Wisdom, discusses the magical intent of pilgrimage, that moving through various limen, or walking a labyrinth, is designed to induce an altered state of consciousness. I would like to think film location hunting is about a similar drive; drawing us closer to a pop culture Godhead – the projectionist at an inner cinema of our filmic memories. It's a religious impulse, a seeking thing. We want to know how these hyperreal yet false memories were constructed.
The crime scene featured heavily in Laura's deliciously morbid investigation into the paradox of beauty and violence. Through a series of provocative annotations her talk revealed the omen of the idyll as a sure sign that something terrible is about to happen. Her case study was Ovid's Metamorphoses – Proserpina is raped while collecting flowers, it's an eternal image and one salaciously put to effect by the mass media – the abandoned bicycle of Genette Tate on a quiet county lane in Devon still haunts the newspaper pages of my childhood memories. Tate as Proserpina, Robert Black her suspected killer, the Plutonic delivery man to the underworld. It struck me that Laura's delineation of Ovid's grim subversion of the locus amoenus was a very necessary and gothic reality check against the contrived naivety of rustic psychogeography. The gothic horror of the rural is a Jamesian trope and there was an interesting correspondence between James and Ovid thrown up by Laura's recounting of Myrrha's transformation into a tree - after having being made pregnant by her father. In James' The Ash Tree the vengeful spectre of an executed witch, Mrs Mothersole, inhabits a tree and wreaks havoc on the nearby hall. If you visit the village of Great Livermere, where James resided as a child, then you will find many Mothersole graves, including one beneath a large tree that leans onto the church roof. I can't help but feel that James' used this arrangement of tree, grave and building as the inspiration for the narrative structure of the story. The subversion of locus amoenus has its decadent counterpart in Octave Mirbeau's Torture Garden. Beautifully manicured lawns become the venue for exquisitely fiendish executions. One prisoner is even tortured in the hollow of a tree. 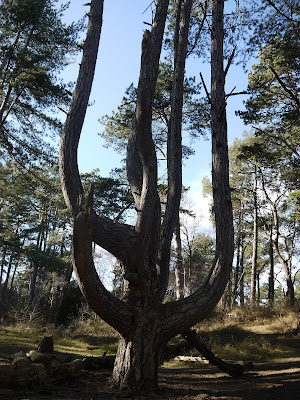 Mark's essay discussed the recurring motif of inorganic demons and xenolithic artefacts in the stories of M R James. A fascinating counterpoint to James' inorganic demons was disturbingly presented by Hayley Lock in her performance of John Ruskin's letters to his cousin Joan. Interspersed with the deeply infantilised love letters of a clearly psychotic Ruskin, the performance also took excerpts from a series of lectures by Ruskin discussing morality - through the metaphor of crystals. In Ruskin's mind, young women and xenoliths fuse to render inorganic angels. I suspect Ruskin's fixation for his young cousin is an example, par excellence, of Stendhal's theory and experience of “crystallisation”. The term crystallisation has become codified in therapeutic parlance as the extreme end point of limerence. There is a wonderful description by Mark, of Parkin, the central character in Oh Whistle, as “a crumbling logical positivist”. Hearing Hayley's performance this would be equally apposite for the creepy Ruskin. His baby talk letters whilst queasy also have the dissociative quality of poltergeist speak. Where James' rural invaders are pursued by the spirits of inorganic demons, Ruskin's limerent Conniston is populated with inorganic angels.
To illustrate Ruskin's lectures, Hayley had produced ten collages of landscape metamorphosed through a Claude Glass. Her collages show weird orb like intrusions, renaissance UFOs only seen through the prism of the scrying mirror. Mountain symbolism echoed through the talks. Sharon's holiday photographs showed an absent Freud vacationing in the Alps. Hayley\s performance was annotated by a video loop from Boris Karloff's Frankenstein, a girl by a mountain stream picking flowers. Ovid's crime scene idylls fuse with the romantic pederasty of Conniston's mystic. If the train is a steampunk demon then our destination is at the mountains of madness with John Ruskin.
The inspiration for Hayley's piece came from a residency at Ruskin's lakeside idyll, Brantwood. Staying over in one of the rooms, she was visited by the spectre of Ruskin. Brantwood looks over Conniston water, where Donald Campbell died when his jet powered boat Bluebird somersaulted and disintegrated during an attempt to break the water speed record. Bluebird is an inorganic demon, but also a creature of born of macho hubris against nature, epitomised by the likes of Jeremy Clarkson. I secretly hope Campbell's gelatinous ghost will rise one day from the lake like the false ending in Friday 13th. Stone and man resonate through Ruskin's biography. Brantwood is haunted by the fell, Old Man Conniston, in local lore, a simulacra of Ruskin. The museum at Conniston exhibits a giant xlyophone constructed by the perverse polymath of Brantwood. It is called an harmonicum and is made from singing stone quarried in the fells. There would appear to be sirens in all Ruskin's mineral obsessions.
-----
Hot on the heals of Hostings 6, GHost will be manifesting at Senate House on 14th March, for the second part of this investigation. It promises to be an equally stimulating and eclectic evening - featuring paranthropologist Jack Hunter,  artists Hollington & Kyprianou, and archaeologist and ghost excavator John Sabol. The event starts at 6.30pm. Seats are free, but mail ghost.hosting@gmail.com to reserve your space.  For more details, visit the GHost blog.
Posted by Dr. Champagne at 01:50 3 comments:

Harwich, a set on Flickr.
Home of the Mayflower... maybe responsible for the New England Lovecraft overlay? Out and about with Jon, Yuka and Amy.
Posted by Dr. Champagne at 17:20 1 comment:

English Heretic's photostream on Flickr.
A visit to Shingle Street with Mark, Zoe and the kids - prior to watching the Gnostic TV epic - Artemis 81 - filmed in part at Shingle Street....

Shingle Street is Dune filmed on The Falklands...
Posted by Dr. Champagne at 16:44 1 comment:

English Heretic will be performing at CafeOTO as part of the first in a new series of events from GALVANISED! 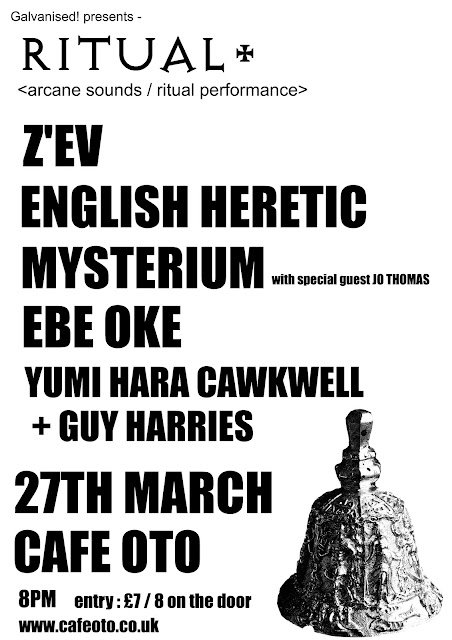 Briefly, our set will be showcasing new material from the next English Heretic release, provisionally entitled "Anti-Heroes"... with tributes to Black Plaque recipients Angel Blake, Robert Cochrane, Dick Bush and the monks of Medmenham (Paul Whitehead, George Selwyn and Thomas Potter).
About Ritual

Is a new series of events from art-music curators GALVANISED! exploring esotericism in music and performance art. We are producing an exploratory platform that brings together artists and musical performers to examine and amplify the relationships between; magic / movement / action / art / sound. RITUAL will glamorously keen your mind - lest we will open up new possibilities in the theatrics of musical presentation.