Yet more on earthquakes and magick. Zombie Diaspora is the blog of John Cussans, well worth investigating. 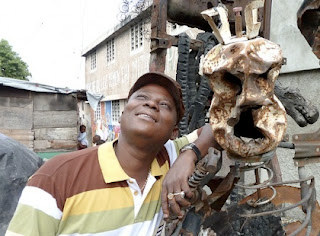 The latest entry from John:

"Andrè Eugene is planning to build a memorial to the earthquake with the bones of victims. It’s a brilliant idea. I think that will be a major and much needed work that will hopefully bring international attention to the hypocritical double-standards of the western corporate media’s approach to the permanent man-made catastrophe occurring in Haiti."
Posted by Dr. Champagne at 14:05 1 comment:

The Occult Peter Parker Of Holborn

One of the more impenetrable mysteries of Kenneth Grant's mythos is Auguste Busche's Emporium. The place crops up in Hecate's Fountain. It appears that the young Kenneth visited this shop just prior World War II to buy some occult nick nacks, but inadvertently walked off with a statue of the devil. Mundane distractions inexplicably prevented him from returning the object until 1958! However on visiting the emporium, a mere 20 years later, Grant was surprised to find the place closed down with a "To Let" sign up. At the time of his appropriation of the statue Grant states he was living in Fetter Lane, Holborn. Auguste Busche's Emporium was on Chancery Lane (just around the corner).
On our recent walk through Holborn, Mark pointed out the building on Chancery Lane that Crowley shared with Allan Bennett. There's a great description of the pad on Lashtal, courtesy of the Daily Mail!
"The visitor passed from the cold stone dusk of the stairs to a palace of rose and gold that has long since vanished. Gold-black Japanese wallpaper covered the rooms and the place was lit like a brothel by an ancient silver lamp with a red bulb. The floor was covered with leopard skins and on the wall there was a huge crucifix in ivory and ebony.


There were two temples, one to good, the other to evil. In Crowley's 'Black Temple', actually more of a cupboard, a blood-stained skeleton sat before an evil altar, made of a round table supported by the figure of an ebony negro standing on his hands.
On the altar a sickening perfume smouldered in a container and one visitor claimed the stench of previous blood sacrifices filled the air." 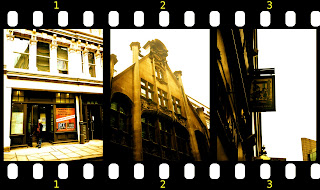 Could it be that Auguste Busche's emporium is a magical rendering of Crowley's flat and that Auguste Busche is a qabalistic cipher (A.B being the initials of Allan Bennett). It maybe a playful poke at Crowley himself, who chided Grant for his use of "mock qabalah". Grant claims his "mock qabalah" is perfectly legitimate and derives from something called "Theosophical Qabalah".
In Remembering Aleister Crowley, Grant defends himself,
"My 'mock' qabalah is perfectly legitimate.  It is known in some circles as the 'theosophical' qabalah, the word theosophical being used in its etymological sense and having no connection with the Society of that name.  Ouspensky alludes to the Theosophical Qabalah in connection with the 17th century mystic, Gichtel, author of the Theosophia Practica.  The system has been widely used ever since."


Funnily enough, we also found a pub called "The Printer's Devil" on Fetter Lane, a paranoiac double of Grant's stolen statue?
In the final tome of the typhonian trilogies, Ninth Arch, Grant obsesses about Busche, but also makes an allusion to the Holborn Viaduct referring to,
"a spectacle that arrested his [Frater Aossic - i.e: Grant!]  attention whilst passing along High Holborn. In deep shadow, the thread of a spider's web underwent a sudden magnification and presented a solid seeming cable whereby one could swing from the (Holborn) viaduct on to staircase. This he did, and found himself strolling down chancery lane in brilliant sunshine."
One has a vision of a young, sensitive Kenneth Grant, undergoing some kind of arachnidal transformation, an occult Peter Parker, swinging through the smokin', jazz infused streets of 50's London.
What's also interesting is that Austin Spare was born near Holborn Viaduct and attended the church school of St. Sepulchre Without Newgate. The church stands on the junction of The Old Bailey and The Viaduct Pub. There is a legend that The Black Dog of Newgate haunts this area and used to appear before executions. According to the legend the black dog began haunting Newgate after a scholar tried for sorcery was eaten by fellow inmates, before he could be executed.
What's also clear from Ninth Arch (see page 306), is that the Busche Emporium is one of the nine hotspots in Grant's often bewildering magical world. To summarise they are:
1] Dongola, in the Sudan associated with the Children Of Isis
2] Kabultiloa in South Africa associated with the Cult Of The Spectral Hyaena
3] Ku in the Chinese Province of Honan
4] Leng on The Sino-Tibetan border
5] R'lyeh associated with the Cult of Cthulhu
6]Limehouse, the abode of Sin Sin Wa Wa
7]Chancery Lane associated with The Busche Emporium
8] Bond Street, the abode of Kazmah
9] Candleston in South Wales associated with The Cult of Qrixkuor.
I think the time is ripe to pick apart these various psychogeographies, to draw a map of the delirious other world of Kenneth Grant, we could find ourselves exploring a Trouille like dream terrain of confabulation and the hyper-realised mundane.

I've been reading Spring Journal 74, which has some deeply insightful essays on the lumen naturae, separatio, true imagination, and the alchemy of colour.
Elizabeth Eowyn Nelson's discussion, "Conflict as Creative Act: Psyche's knife, Separatio, and the Feeling Function", focuses on the image of the knife in the myth of Eros and Psyche. Nelson argues that the knife has been much neglected by analysis and artistic depictions of the tale, in favour of the lamp. Psyche is given the lamp and the knife by her sisters. They have convinced her she has married a monster -  Eros. She creeps into his room at night to obtain a glimpse of his face - the lamp, to cast light on the suspected monster, the knife to kill him. As it turns out, Psyche is overwhelmed by the beauty of Eros, but Eros is betrayed. He has forbade her to look at him.
Nelson goes on to relate the knife with the separatio of alchemy and makes the assertion that,
"[w]hen we take up Psyche's knife as Psyche did, we make choices with our vulnerable emotional bodies and not simply with cool, unfeeling intellect. Little wonder that our pace in such times is slow rather than brisk, we feel confused long before we are clear, and even clarity is evanescent."
Our symbolic use of Psyche's knife is a means of becoming conscious through finer and finer discrimination. The awakening of Eros by Psyche is to relinquish puer aeternus, the perpetual child, a world of possibilities with no genuine existence at all.
"The individual is one who has sacrificed the puer dream of being all things to become something more humbling but infinitely more valuable: a 'real fragment'."
Nelson introduces the paradox that only by becoming a real fragment can we relate to the eternal whole. Aware of our unique personal combination - by definition, limited - we then have the capacity for becoming conscious of the infinite. "But only then", cautions Jung.
Taking her thesis to a conclusion Nelson argues boldly,
"Psyche's real guide is the cosmogonic Eros, the original, primordial force of love and desire who helped engender the cosmos... Even in agonising confrontation, the soul's fate is always erotic in the largest sense of the word: dynamic, fluid and relational... Sometimes eros flows towards another person, our work, a cause, an object or a place... At other times, the flow of eros is inhibited..."
Our task she states, quoting James Hillman, is "to trust that the movements of eros in our lives are meaningful and right."
Posted by Dr. Champagne at 06:13 1 comment:

The Concrete And The Clay beneath our feet

There is now a site dedicated to the Magick Concrete project
I was amused to read the news report of the earthquake in Cumbria at 23.00 hours on the 21st December, the day of the reification of  Do They Know It's Mithras? For the first time in any of the recitals of this Mithraic Rite I used the section of text from the eight utterance:
1. Hail Guardians of the Pivot, ye, sacred sturdy Youths, who all, at once, revolve the spinning Axis of Heaven's Circle, ye who let loose the thunder and the lightning, and earthquake-shocks and thunder-bolts upon the hosts of impious folk,
The epicentre of the quake was at Coniston, resting place of Donald Campbell, overlooked by John Ruskins' house. According to one local:
Neil Wilkinson, of Whitehaven, Cumbria, said the tremor "shook my house and the bed I was lying in".
Whitehaven is my birthplace. Given the connotations of rebirth in the later sections of the rite, one might say this is a synchoncreticity... Today (4th January) is the anniversary of Campbell's death, at Coniston Lake.

The Christmas period was spent in Barcelona, Montserrat and Figueras researching, documenting and recording for Magick Concrete.  Christmas day was spent in Montserrat, where I attended the Mass and took part in the adoration of the Black Madonna in the crypt of the Santia Maria monastery...