Oh Xiurell And I'll Come To You 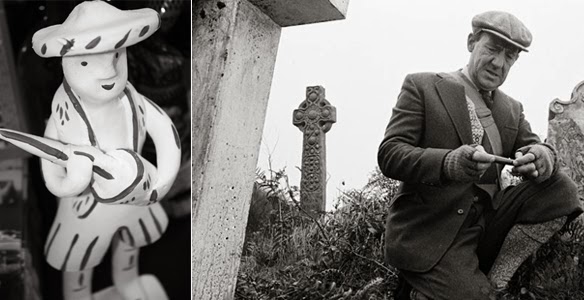 I've been looking at various mermaid myths recently and while doing this, started looking at references in Robert Graves' "The White Goddess". I am not sure how widely disseminated this is, but thought it worth sharing. Anyhow it's very interesting to me, being Suffolk based (where M.R. James based 'Oh Whistle'), and offers some intriguing connections between M.R. James, Graves, as well as further interpretations of the story, and some nice cinematic doubling.

To summarise, in a chapter of "The White Goddess", called "Gwion's Heresy", Graves discusses winnowing feast mysteries and makes mention of a Majorcan artefact of this harvest festival. It is called the xiurell, and is a white clay whistle, decorated in red and green. The whistle is handmade and cast in various shapes such as a mermaid, a coiled serpent, or a full skirted woman rocking her baby in her arms. According to Graves the whistle figured in an ecclesiastical festival that took place on 12th of September. The festival entailed the villagers of Bonanova, near Palma, perambulating up the hill, presumably blowing these whistles. The object of the whistle, posits Graves, "must originally have been to induce the North-East winnowing winds which, according to the local almanack, begin to blow at this season and which at the end of the month summons rain clouds from the Atlantic Ocean to soak the winter wheat planted earlier in the month."

Graves says that the mermaid, locally called a 'siren', evidently represents Aphrodite (also represented by the woman and baby shaped whistle).  The serpent is represented by the wind (presumably denoted by the coiled serpent whistle). He maintains that "this is the only time when the wind is welcomed by the Majorcans, who... fear the sirocco as they fear the devil". The whistling is not heard in the island except in the xuirell season.  Then most curiously Graves injects the following non sequitur:
"The ploughman sings as drives his mule and the schoolboy as he runs home from school; for the rest furbis, flabis, flebis - 'whistle shrill, weep long' ".

The fur fla fle bis, is of course, one of the inscriptions on the whistle excavated in M.R. James' tale. I am not sure what to make of this. Were James and Graves drawing from a similar Mediterranean custom, or was Graves merely injecting James' story into his mythopoesis - which is an interesting insight into the mechanics of his creativity. I haven't read any accounts of Graves studying James' stories. It also adds another aspect to 'Oh Whistle'. I've always considered to the story to have strong succubal or incubal overtones, as well as being a quite strong evocation of sleep paralysis, but it could be drawing from Greek mythology too, though Jacqueline Simpson in her essay on folkloric elements in M.R. James draws on Jutland customs to possibly explain the roots of the story.

As well as Graves' account of the harvest time ritual, there's also a festival in the municipality of Llubi on Majorca, which takes place on the Saturday before Shrove Tuesday. It's called the "Fiesta of the Xiurell" and during the ceremony a giant xiurell or demon-shaped whistle is burnt. Presumably this is to mark the beginning of the agricultural year.

I also wonder whether there is  a connection between the film "The Shout", which came out in the late 70s, and "Oh Whistle". "The Shout" was filmed in Devon among the dunes and starred Alan Bates. He plays a madman who infiltrates a couple's lives, seduces the wife and plays mind games which her husband, played by John Hurt. Hurt's an electronic music composer and Bates claims to have learned from aboriginal shaman how to kill with a shout. The coastal location and the demonic use of the shout bare some resemblance to M.R. James' "Oh Whistle", but most interestingly, "The Shout" is based on a Robert Graves short story. In a weird twist of cinematic fate, John Hurt was recast as Parkin in the recent TV remake of "Oh Whistle".

In Graves' story the husband and wife begin to experience telepathic dreams in which the husband is seen walking on the sands with a strange man who is discussing the whereabouts of the soul. The woman in her version of the dream runs from these figures. Graves' "The Shout" is quite clearly also a conceit for his preoccupation with the story of the poet, muse and wyrd. But there are certainly some intriguing overlaps between the folkloric roots of Graves' and James' research. 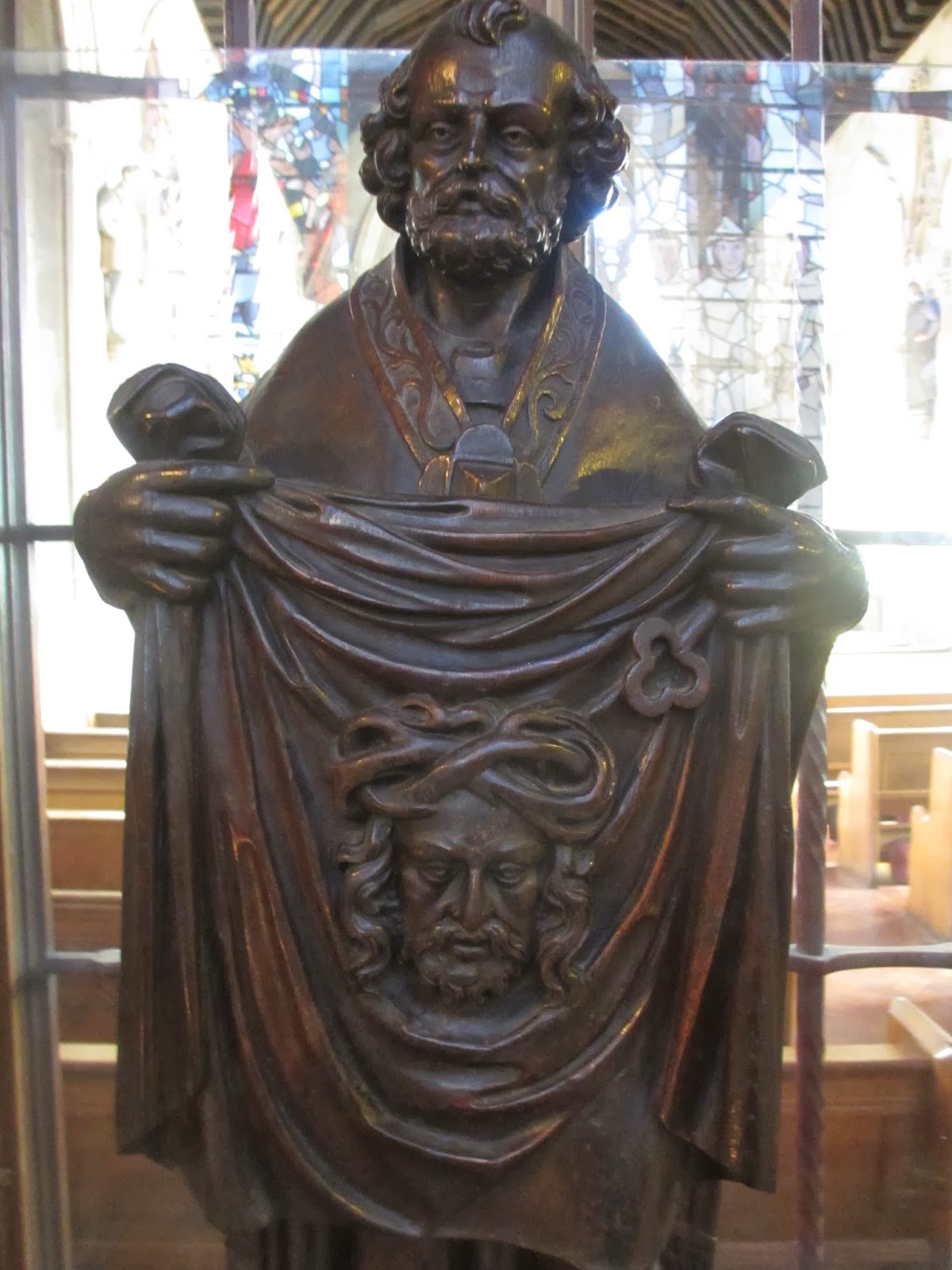 I finally managed to get to St. Etheldreda's church in the heart of London. The church houses a wooden sculpture depicting St. Peter holding a veronica of Christ. The Alchemist Fulcanelli, in "Dwelling Of The Philosophers," discusses this very statue and its hermetic meaning. The Pherenike is a baffling conundrum: the Christian reading is that it is the remnant of a cloth used to bathe Christ's face  - an acephalic turin shroud. But there are obviously allusions to the cult of the severed head and stranger still - Christ's thorns more resemble the coiling serpent hair of the Medusa.

I'll be exploring this mystery and much more in the forthcoming release "The Underworld Service". "The Underworld Service" extends and extrapolates some of the ideas set out in the "Weekend Other World" event last April. "The Underworld Service" pitches some Melvyn Bragg like culture vulture deep in Hades - what I term sepul-culture. Over the last two years I've been visiting and recording at a wide range of venues from: Hiroshima to Blythburgh, Sizewell B, De Grey's Mausoleum, and finally St. Etheldreda's. "The Underworld Service" builds on these locations to create a concrete irrational documentary: taking the mid 70s obsession with Greek Thrillers, the atomic alchemy of Fulcanelli, Victorian Funeral customs and their cannibalistic antecedents; the potentials for misuse in the field of music thanatology; the hermetic journeys of The Haunted Shoreline; James Hillman's Revisioning Psychology and much more. Musically and thematically, "The Underworld Service" is English Heretic's most death enhancing release, covering a wide genre of styles, philosphical stoner, corpse orientated rock (where adult orientated yacht rocker's sail to); chiliasm music and many other puns.

The album will feature 8 new tracks.

The provisional track listing is:

Coming soon: Film And Its Double 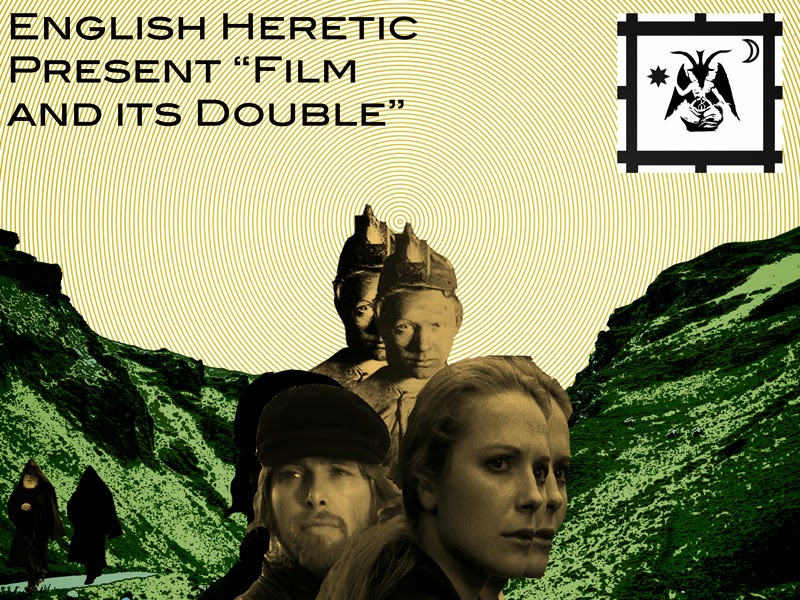 When the thrill seeking anthropologists of the English Heretic field unit set out to investigate the locations of what appeared to be a merely harmless video nasty from the 1970s, they got a lot more than they bargained for. Winnats Pass in Derbyshire, England –a beautiful limestone ravine reveals its deeper and disturbing history. From Spanish Italian zombie horror “Living Dead At The Manchester Morgue” to the brutal regimes of industrial slavedom, the mines beneath tell a story of lead poisoned, schizophrenic labourers, the savage murder of eloping lovers and gruesome karmic retribution. Might the caves that scar this once submarine coral reef, lead to hell, the devil's fundament, or further … to the black temples of Atlantis where the priests themselves infused their soul controlling rites with diabolical and tantric methods.

English Heretic present Film And Its Double: "Let Sleeping Corpses Lie" – an excursion to the most dangerous vales of reason, a deep history lesson taking in film, folklore and the outlandish theories of voodoo gnosticism.
Posted by Dr. Champagne at 16:15 6 comments: