The Fool as the future 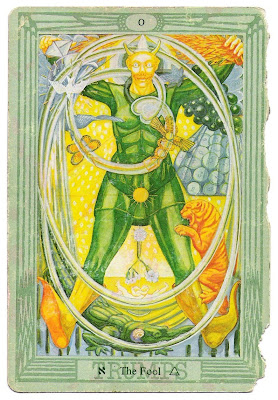 I was once asked if English Heretic was a cynical project. The question astounded me, but it has made me wonder what is the governing aesthetic. I've been doing tarot readings recently and my last reading gave me "The Fool" (ATU 0) as the future. This was an instruction to write a blog entry about the Fool, I intuited. To be honest I hadn't really apprehended what the aesthetic was until I saw Stewart Lee doing a routine on his "Comedy Vehicle" TV series about the funniest moment in TV history, which is Del Boy falling over in a bar in "Only Fools and Horses". He developed the sketch into this folk ritual whereby the routine was enacted as a Wicker Man type ritual. Essentially the "Extended Conceit".

The crazed overwrought narrative of the sketch clicked with this project. English Heretic really came out of a discussion at work with a colleague where I was trying to explain what I was doing at the weekend, which was hanging around Ipswich crematorium, recording the ambience and talking into my tape recorder as I walked around the Temple Of Remembrance. Anyhow, I felt pretty foolish when I was doing this, but extracting a few samples of my talking, it actually came across quite sinister.

At one point during the project, I had thought of making each of the Black Plaque celebrants into one of the major arcana in Tarot, ie a Fool, an Emperor, an Empress. That was until I realised that most of the celebrants would be Fools. The fool has further resonance for me at the moment. Last week I visited a lecturer to discuss a project using neural networks. In our discussions, we talked about Mindfulness. He mentioned a book to me called "Zen and The Brain". I've been trying to use Mindfulness alot recently as a means of living with an emotional narrative, as opposed to thought based narrative. The effects have been astounding. By thinking about often buried painful memories, I can create huge involuntary spasms in my stomach, accompanied by a deep groan. It's almost like the opposite of the Janov's "Primal Scream". This has made me suspect that the whole basis for spiritual enlightenment is based on the fallacy of ascent - essentially spiritual inflation. It's not so much switching off the mind that is important, but realising that the brain is merely a machine, part of the body. Hearing and accepting its chatter for what it is, just as you hear the gurgle of the stomach. It's certainly less important than the gurgle of the stomach. What it constructs is a set of instructions based on a set of instructions given to it from another machine and so on. What thinking can't give is insight, the solution as something seen, and the path to the solution then derived.
The Fool represents mindfulness in this way, operating with insight. It doesn't attempt to control reality, like the Magician, hence why it is ATU O. It operates without the need for conscious conjuration, more like Don Juan of Castanada - its mistakes are choreographic into successes, it stumbles into an elaborate dance. In terms of the research for English Heretic, it follows the idea of the apotheosis of the absurd. There is an ontology to the absurd say in Jarry's Caesar Anti-Christ that represents this perfectly. The taurobolium at the climax of the play started off a school boy joke against a much loathed teacher at Jarry's school.

This also relates to our Wyrd. Our childhood obsessions can be revisited, made more grandiose, beatified and made into this overwrought history - a conspiracy of which we are at the centre, playing the fool, probably. And the fool has an interest in follies. Follies themselves represent the apotheosis of the absurd. The structure has beauty but exists on the basis of a whim. We are but the stuff that whims are made of, we are but the stuff that cum is made of.
English Heretic was really something borne from nothing. A hobby to engage the imagination on family holidays and days out - a bit of fun. The Fool expresses the equation 0=2, something from nothing. It was also conceived as a nothing organization, imaginary, a organization of the imaginative faculty. We are all nothings "thinking" we are somethings. This is the neural network. As soon as we start believing we are something it becomes precarious. We cease to be mindful and mistake fantasy for reality. We lose our step and lose our keys, this is the psychopathology of the everyday of Freud. We lose our ability to have fun. But we can't find fun, just as we can't find spontaneity, or what is already there... if magic works by the path of least resistance, then fun works by the path of no resistance. Fun and ludic play are not only not magick without tears but without magick and with laughter.
The fool at the centre of the great conspiracy indeed is a masonic initiation, the pharmakos surrounded by hoodwinkers. The structure of Wicker Man and James Shelby Downard's Kill King 33 are two great inspirations. The pagan sweet shop in the Wicker Man, the ambient aesthetic. If all thoughts are fallacious, then all thinking is essentially a paranoid construct, one of interpreting reality for what it is not. The fool intuits this and attempts to remain mindful of the present. This is the ultimate paradoxical joke of being dealt "The Fool" as the future... 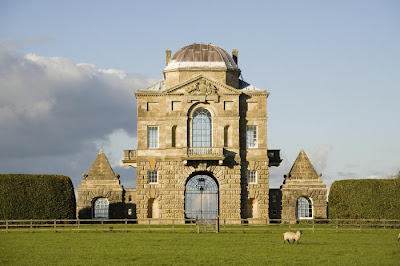 I was in Bath this weekend. On Sunday we visited Westbirton Arboretum. On the way back, we passed Badminton Stately home and I was pleased to see that the Worcester lodge there has two pyramids either side of it.

Indeed, Gloucestershire itself is home to 10 pyramids, so is somewhat of a hotspot. Badminton, of course, is famous for its Horse Trials. I am currently working on a writing project called "Hippomania" which concerns man's relationship with horses. This has got me thinking on the connection between horses and pyramids.

The ritual itself an enactment of symbolic of the Cosmogonic Hierogamy - the primordial sacrifice of the world. Prof. Jose Alvarez Lopez, has investigated the connection between Pyramids and the Cosomogonic Hierogamy in detail. The horse is likened to Purusha, archetypally associated with Christ.

This morning I received a mail from a journalist who I had talked to a couple of weekends back. We were discussing follies and she mentioned a folly in Chambourcy in Northern France that was much loved by the Surrealists. Georges Bataille's "L'Acephale" group also were obsessed with this garden. It is called the Desert De Retz. The Desert De Retz reflected 18th Century interest in antiquity and includes an ice-house in the form of a pyramid, an Egyptian Obelisk, a Temple dedicated to Pan, and a Tartar tent. 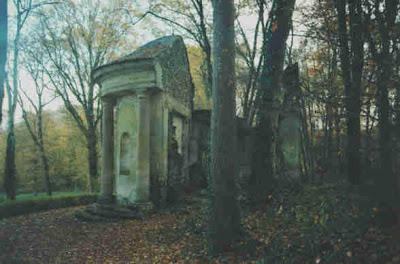 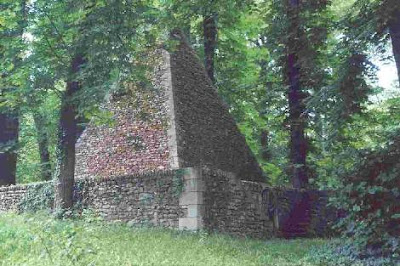 One of the many famous visitors there was Jackie Onassis. Given that the L'Acephale group were obsessed with the head as a mystical totem, it's maybe not unsurprising the JFK's wife should be unconsciously drawn to such a place. The symbolism of the horse in the funeral of JFK is interesting. The coal black horse at the funeral procession of Kennedy was riderless with a pair of spurred boots facing backwards in the stirrups. This denotes that the deceased person will never ride again and is a feature of Military corteges of high ranking officers. 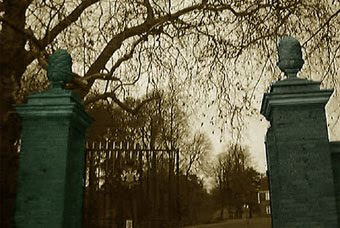 The front image on English Heretic website comes from the gates of Christchurch park in Ipswich. On top of the columns are two pine cones. The entrance to the park is opposite the Ipswich Masonic Lodge. A few year years ago, I worked in a suite of offices next to the lodge called Saracen's House business centre. Inside the business centre was a picture of the building as it was. The business centre used to be the Saracen's Head public house.
Of course the Knight's Templar worshipped a severed head. A few months after joining the company, we relocated to Crown House offices, just up the road. Sometime later, a chap visited our offices offering my then boss a whiteboard that his company in the same office block, no longer required.
A few weeks later my boss told me the man who had visited was the brother of Ken Bigley, the hostage. Bigley had just been beheaded.
The truth reveals itself in images...
http://www.conesandstones.com/historical-symbolism.html
Posted by Dr. Champagne at 15:58 2 comments:

Recent interview with English Heretic on ResonanceFm, in conversation with Ken Hollins and Mark Fisher. Two commissioned pieces of music by English Heretic were also played.

To listen to the podcast go here: