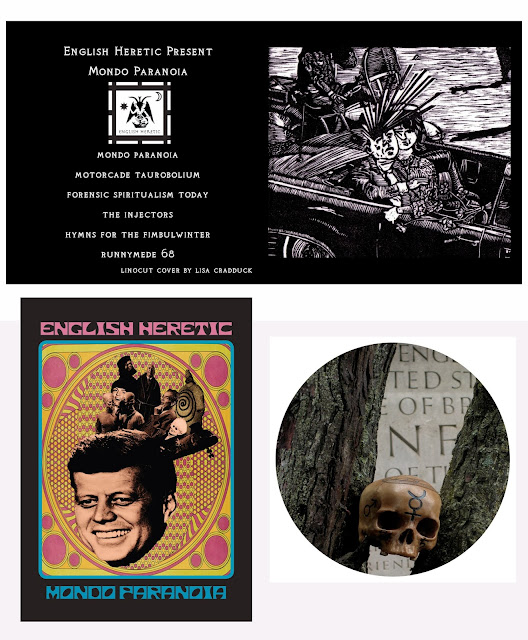 Mondo Paranoia: A Medieval History Of The Early 1960s explores the thanatological synchronicities of the 22nd November 1963: the simultaneous deaths of JFK, Aldous Huxley and C.S. Lewis. Paradoxically 22nd and 23rd November also witnessed the activation of two mind bending Pop programmes: The Beatles' world conquering second album and the first episode of Dr Who.

Mondo Paranoia serves as an initiatory and analeptic voyage into the deep mind of the 60s: further katabatic excursions to its queasy and oleaginous core are planned for 2014.

Wrapped in a crime scene linocut cover by Lisa Cradduck, comprising of a 33 min documentary and 12 page essay, Mondo Paranoia, English Heretic’s 11th release beckons in the coming fimbulwinter and honours with relish the diabolical release schedules of our media cabals.

CD  - With music constructed from forensic sampling of JFK's funeral, amplifications from ancient television transmissions, and field recordings from the Kennedy memorial at Runnymede.

Booklet - The accompanying document is an unofficial report on the taurobolium in Dallas and its ramifications for reality, extending as far as the previously undisclosed sex laboratories of time and relative dimensions in space.


Mondo Paranoia is available as a limited edition CD and booklet, with free digital download of both.

Available at the souvenir shop
Posted by Dr. Champagne at 13:07 1 comment:


English Heretic will be performing at "Unearthing Forgotten Horrors" next Saturday, 9th November. Iam very much looking forward to playing in Newcastle. The event has been lovingly curated by Darren Charles and Victor Janos. Alot of work has gone into it, so do coming along if you're able to, this deserves support.

For our part English Heretic will be performing a collision of material from "Anti-Heroes" along with a brand new piece from the forthcoming Mondo Paranoia. 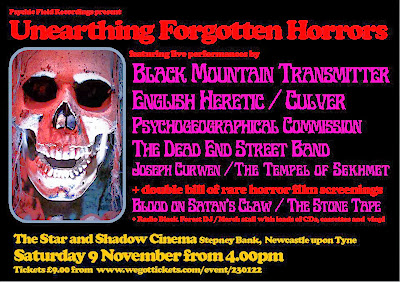 Bringing together rare film screenings of key works from the golden age of UK horror, with an exclusive line up of musicians/bands influenced by them, Unearthing Forgotten Horrors is a celebration of horror in music and film.

Unearthing Forgotten Horrors marks the first live performance of Black Mountain Transmitter in England (and indeed outside the island of Ireland).

English Heretic
English Heretic is a creative occult organisation dedicated to the reification of malefic energy spectres and the adumbration of a modern qliphoth. In operation since 2003 English Heretic has ploughed the topsoil of horror film locations to reveal a delirious substrata of mythic truths. They have reported back their findings through numerous CDs, books, talks and performances of ritual electronics.
https://www.facebook.com/EnglishHereticOfficialOrgan

Through many releases, often micro-editions on seriously cool labels, a consistently macabre approach is applied sound and visuals across a mind-boggling body of atmospheric and horror obsessed work.

Psychogeograpical Commission
The Psychogeographical Commission was formed at the start of 2008 to explore the many interfaces between the built environment and the people who inhabit it through d￩rive, magick and sonic experimentation. http://psychcomm.bandcamp.com/

Several handmade editions on their own imprints and on Indiana's Occult Supremacy label have seen the band develop from home-made electronica through to pitch black, ultra morbid soundtracks from non-existent scuzzfests found in the darker recesses of underground cinema.
www.facebook.com/scumelectronics

The Tempel of Sekhmet
Ooft! Born in the ashes of the first Psychoheliophysics workshops, the subsequent asymmetric awakenings of the Bacchanale Operation and weened on esoteric apophenia. A supergroup of Newcastle//Glasgow//Ipswich-based sunworshipping occultists' suckled by the bitter lactations of M R James, China Mieville, Kaneto Shindo and Jean Painlevé. Spiked with the synaesthetic experimentation of the pre-stalinist soviet union. Developing Solar//Tellurian Circuits to carry out cthonic soil experimentation in search of buried suns and waning solar temples. With the intent to destabilise human neurophysical function over distance. The Tempel of Sekhmet issue a new warning to the curious: unleash your curiosity for all that is eldritch or else die the cold, cold death of doxic submission...
nb. Semantic meltdown may occur when taken in significantly large doses, Tempel of Sekhmet take no responsibility for any sensory or cerebral overload or awakening... Ooft!

Saturday 9 November from 4.00pm at The Star and Shadow Cinema, Stepney Bank, Newcastle upon Tyne.

The first 50 tickets include an exclusive handmade CDr mixed by Melmoth the Wanderer, featuring all of the artists on the Unearthing Forgotten Horrors bill.
Posted by Dr. Champagne at 02:17 1 comment: