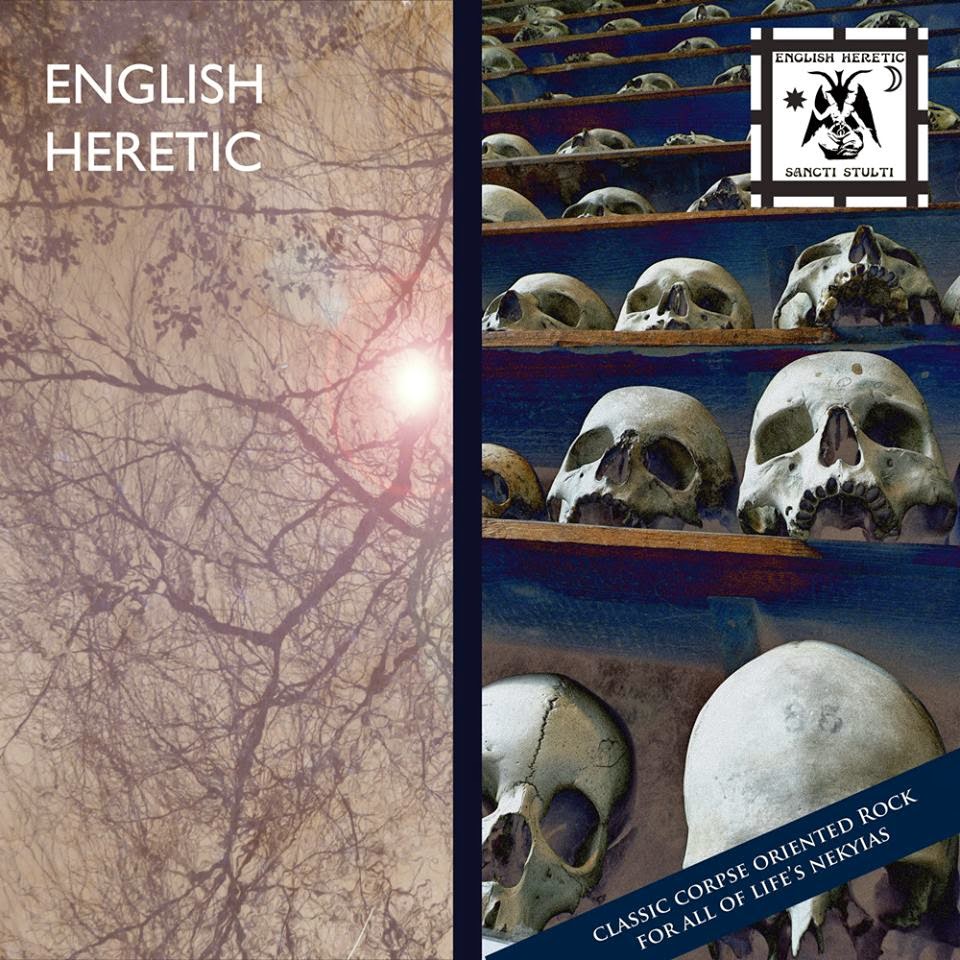 The next English Heretic release, The Underworld Service is due for release at the end of August. Over 70 minutes of new music. The Underworld Service is a holiday in Hades. It subverts the bouffant intellect of Melvyn Bragg culture and celebrates the hard hitting documentary investigations of World In Action. The Underworld in our vision doubles as an hermetic process. We look at the eschatological warnings of the fabled alchemist Fulcanelli and follow his trail from a church in London to the irradiated coasts of Suffolk. The living dead are unearthed in the beautiful limestone ravines of the Peak district and traced to their necromantic origins in the Black Temples of Atlantis.  We bathe in the enolic mornings of Malcolm Lowry, Under The Volcano, inside a giant mausoleum. Informed by the work of James Hillman, English Heretic undertake a series of Katabases: ritual descents and movements towards the seas of the unconscious.

Musically, we scan a waveband of Corpse Oriented Rock, Philosophical Stoner, Field Trip Hop, Horror Folk and Funereal Disco . Radio broadcast from Tartarus, no matter what station you tune into, where every song, news report and culture show reminds you of your own mortality and the hermetic ciphers embedded in pop culture. Music genre as a form of word play, honouring the cabalistic punning tradition of Fulcanelli.


Inside The Mausoleum
In honour of the katabatic alcoholic tragedy of Malcolm Lowry. The track began with an improvisation carried out inside De Grey's mausoleum near Clophill in Hertfordshire. It's my argument that fictions should start at the point of death. Lowry's Under The Volcano is an example par excellence of this process. The track evolves into an evocation of an hermetic journey, a paean to the universal solvent of inebriated lyricism. The situationists paid homage to Lowry by carrying a series of psychedelically informed derives to the Paris suburb of Sarcelles. They were high on mescalin at the time. Sarcelles by a curious coincidence was the location of the alchemist Fulcanelli's legendary transmutation in 1922.

River Of Black Rams Blood
Kereyni's description of Hades re-imagined as the main theme to a Greek horror film. The track was composed from snippets of  "Land of the Minotaur" theme together with field recordings from a corpse road at Walsham Le Willows in Suffolk. As I recorded the church bell peels, a child  could be heard playing on a swing in a neighbouring garden. The creaking of the swinging was oddly melodic and when processed back in the studio created a perfect imitation of a folk rock flute riff. Vocal wise, Alan Vega or Andrew Eldritch (depending on your critical angle) down the Greek discotheque backed by an ageing English Lit. Professor – the types you'd meet on an horrific  Mediterranean  holiday.

Video Anxieties
This forms part of the research I've being doing into  constructing a private inner cinema. The track is an attempt to remap the locale of zombie Horror flick – Living Dead At Manchester Morgue. This infamous video nasty set bizarrely enough in the Peak District, gives the film a gory beauty. Our interpretation is folk horror soundtrack part documentary of a vaguely anxious travel guide, the dialogue abstracted from Living Dead At The Manchester Morgue – to recast the script as a paranoid holiday outing. A sinister  documentary  element is added by an  Italian voice over reading an extracts from Kenneth Grant's  Nightside  of Eden,  In  Nightside  Grant makes the claim that the  Altantean  Priesthood employed  sexual necromancy in their the creation of zombies. Hardcore horror and hardcore occultism meet in the mid 70s.

Let Sleeping Corpses Lie
Horror folk. The song is a traditional Derbyshire ballad  concening  the infamous Winnat's  Pass Murders. Sound affects are taken from Living Dead At The Manchester Morgue, of the zombies' curious gurgling sound. Director George  Grau  based the sounds of the zombies on his memory of hearing his own father's death rattle.
Transmutation At Sizewell B
The Greek concept of the  Katabasis – a ritual descent – can also mean a journey toward the sea. The track is derived from recordings made during a serendipitous katabatic journey toward the Suffolk coast.  The journey began at the infamous Blythburgh  church (where the devil is said to have visited in the middle ages). While there, we recorded a local choir were rehearsing Office Of The Dead. We then drove to Sizewell B and recorded the ambience, to be later processed into an imaginary  geiger  counter sound. The lyrics come from the final chapter of  Fulcanelli's  Mystery Of Cathedrals. Mystery of Cathedrals is an alchemical warning  against  the misuse of atomic chemistry. Most curiously, opposite the entrance to Sizewell B, is a pub called the  Fulcan  Arms. The pseudonym  Fulcanelli  is thought to be derived from the name for the Roman God of fire and forge – Vulcan.


The Pherenikos
Philosophical Stoner Rock: in which we tackle the ancient veneration of the severed head in the figure of the Gorgon contrasting feminine tenderness with US servicemen's abuse of VietCong in the process of trophy skull adornment.  The track that exposes heavy riffs whilst also considering serious gender issues encompassing religion, war and masculinity.

Invisible Canon
The piece began with two field recording on a visit to Hiroshima. The first, the sound of the thousands of cicadas near the ruin of the Atomic Dome, the closest surviving building left standing after the bomb. The second field recording taken on video on my Cannon camera was of myself striking the peace bell.

The piece includes the choir of Gyuto monks. This was inspired by a dream recounted in Michael Horwitz Hill's book Dreaming the End of the World  in which one of his subjects experiences a nightmare where sound of B52 bombers has been replaced by a choir Gyuto monks.

For the structure of the piece, I wanted to create a track in the style of apocalyptic DJ Shadow - DJ 'Falls The' Shadow - a reflection on an incredible exhibit in the Peace Museum at Hiroshima. The museum contains the steps of a local bank with the shadow of a body, evaporated during the explosion: the most haunting and violent sculpture, one can imagine.

Operation Wandering Soul
The early 70s as the underworld, a report on the documentary roots of Apocalypse Now.  A homage to  ITV's World In Action and its expose of rebellion in the ranks of U.S grunts and  the use of sound warfare to create imaginary Viet Cong ghosts. Operation Wandering Soul was conceived in the echo chambers of the US military.

Looks excellent! Looking forward to getting a copy!

cheers James - yeah it's come out good. Will be getting blurb for Oct out soonish - try and meet up in August?

Hi, yes an August meet sounds good! Got yr recent mail re: October. Will e-mail you in more detail soon. Hope you're well!

They all seems like incredible reads. But I have selected two to give it a go.
compare airport parking
meet and greet Luton

Hello Everybody,
My name is Mrs Sharon Sim. I live in Singapore and i am a happy woman today? and i told my self that any lender that rescue my family from our poor situation, i will refer any person that is looking for loan to him, he gave me happiness to me and my family, i was in need of a loan of $250,000.00 to start my life all over as i am a single mother with 3 kids I met this honest and GOD fearing man loan lender that help me with a loan of $250,000.00 SG. Dollar, he is a GOD fearing man, if you are in need of loan and you will pay back the loan please contact him tell him that is Mrs Sharon, that refer you to him. contact Dr Purva Pius, call/whats-App Contact Number +918929509036 via email:(urgentloan22@gmail.com) Thank you.