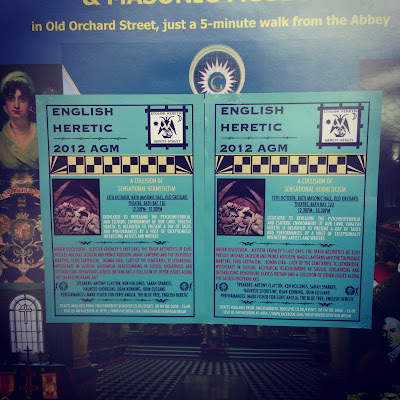 13th October is not only the anniversary of the arrest of the Knights Templar but also the anniversary of The Miracle Of The Sun at Fatima, so it seemed entirely appropriate that we use this date and the sumptuous venue of Bath Masonic Hall for the AGM. I think speakers and guests had a great time and in many ways the Hall itself created the feel of an occult Wendy house - an opportunity to have a go on the grand throne and execute your best Baphomet gesture. Thanks to everyone who was involved.  Many thanks also to Lisa Cradduck and Matt Shaw for the pictures in this article and to Ruth Calland who displayed her photographs in the ante-room during the day, one of which is shown below. Ruth's most recent work is inspired by the notion of the alchemical wedding. There's a tight colour symbolism alluding to the stages of nigredo, albedo and rubedo that give the images an extra potency. 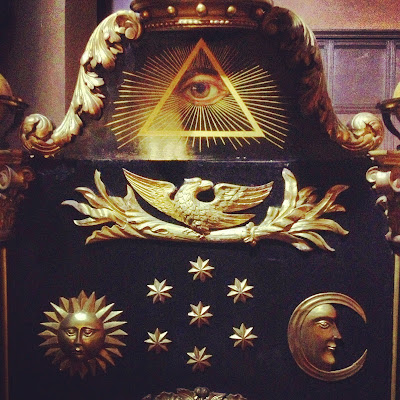 What follows is a short review of the presentations, films and performances.

Haunted Shoreline presented the creative development of his blog project. It's very much an heuristic, empirical approach to occult psychogeography. The images reveal themselves as truths and the hermetic inference follows on via scholarly and sometimes hyperlinked discovery. It's Gordon Burn's Born Yesterday applied to archetypal psychology. The truth can also reveal itself in the asinine as much as the sacred: childlike chalk graffiti intimates the presence of a vampire squid in the subconscious waters near Saltdean. And it's a conversation with the mineral world - an occult philosophy of the stones - Agrippa in the Natural History Museum. 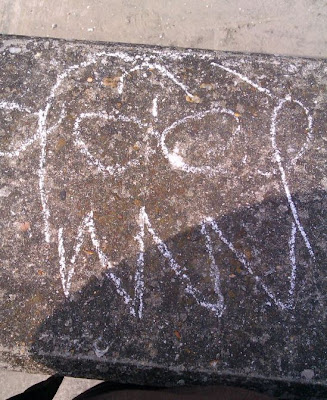 Dean's been a friend and champion of EH for a long time. His short film was a perfect Situationist subversion of the Masonic Hall. Biological education loops pulse like a 70s psychiatrist's hypno-wheel, a map of England infests with maggots as divisive political diatribe heckles over a  high pitched siren. It's a worrying, urgent film, a 5 minute warning for the immediate future. Talking with Dean following the film, I mentioned it invoked the feel of Crass' fantastic polemic poem, Asylum. 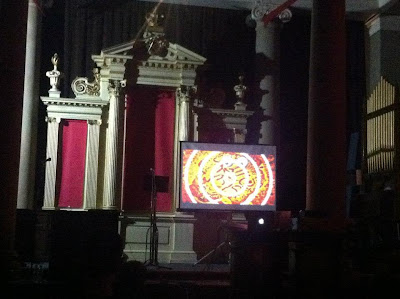 John's talk was an utterly compelling journal of his recent collaborative work for Plastique Fantastique's "There is not and never has been anything to understand" show at ASC. The finished piece was a video projection of John and Roberto Peyre dancing on a veve of Pomba Gira (the loa of prostitutes) to a Northern Soul track called "Spirit". When I saw the installation, it was clear that this was a magical construct and John's talk unveiled its highly symbolic roots: a delicious picaresque and diasporic journey taking in the Crossbones graveyard in Southwark, pimp aesthetics and the occult use of talcum powder in the rites of Northern Soul: pure voodoo poetics. 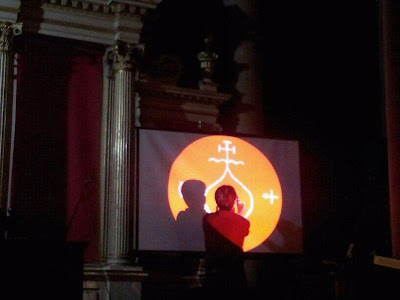 Sarah is currently working towards a piece for a show "Theatrical Dynamics" at The Torrance Art Galley in Los Angeles and her talk was a fascinating glimpse into her working process. Like John's work, Sarah's completed pieces are poetic wholes that are keyed with intense research. So it was very interesting to hear and see Sarah demonstrate the props for her future assemblage, a prima mater of a relative's magic lantern slides (spagyrically imbued with moss),  and the tragedy of the Tolpuddle Martyrs told through Bill Douglas' film Comrades. Currently the stage is awaiting population, the actors and set are gathered behind the scenes, like the Masonic paraphernalia in the secret panels of the Bath lodge. 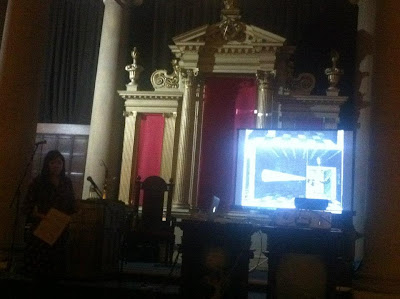 Ken Hollings - The Psychoanalysis of Trash

Ken's talk was a rollicking tragicomedy session of decadent psychoanalysis, but also it has to be said, a profoundly cogent argument illustrating the inevitable self-destruction of the child-king. Taking in the lives and  tacky luxuries of Prince Rudolph, King Ludwig, Michael Jackson and Elvis Presley, Ken demonstrated a reverse alchemy in their demises. The Kings may not die, but they do gradually decay into the empires of their excess. They do, also, like the angels of some lurid occult system display a common set of correspondences - a love of artifice, an asexualisation to the point of infantilism, retreat, military fetishism and the power to indulge every parameter of their self-disgust. 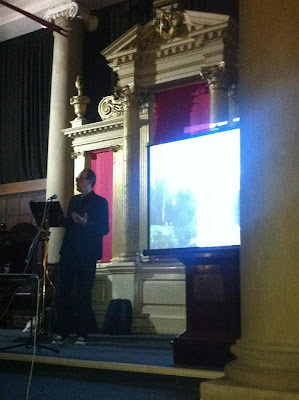 Tony delivered a witty and touching account of Crowley's final days in Hastings from his recently published beautiful hard bound object d'art "Netherwood". The waning black magician of Netherwood is part Mandarin, part Heroin injecting sitcom character. Netherwood itself, Tony brings to life as a lost colony of eccentricity, The Brains Trust meet here and an amateur version of Fall Of The House Of Usher is filmed on location - possibly with Crowley's bizarre paintings in the background. Crowley plays chess, charms children - like Karswell in Night Of The Demon -  and scares the neighbours, a perfect exit to his Thelemic funeral in Brighton. Moreover, Tony pulled in even more curious gentlemen esoterics, most notably the bowler hatted, ever so respectable looking David Curwen, furrier by day, expert in Tantric alchemy at night. It's a wonderful other England. 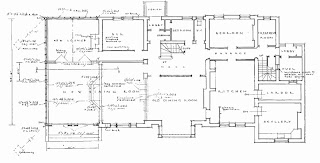 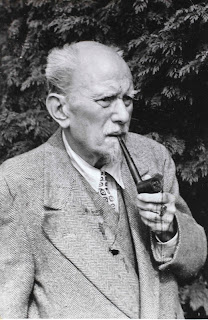 This was the first airing of Eerie Anglia's, "Unvisited Vastness": England as the alien planet. Combining field recordings from Felixstowe with Mark Fisher's prose poem  - a hymn of a vague disease. England is the alien planet. Unvisited Vastness attempts to remove humanity from the container port, recasting the space as the speculative hinterland of some recent and unfathomable invasion. Mantric use of the barbarous names of commerce and rhythmic slideshows culled from documentaries, location visits and film scenes serve to abstract the port as the venue for a new genre of actorless cinema: eerie capitalism, a horror noir for the new depression.

The Blue Tree get the money shot playing in front of the Solomonic triptych. Two tracks of psychedelic landscapes, Matt reads from T.C. Lethbridge, constructs loops from guitar and voice, with Andrew delivering a controlled electronic bleed. It's a shortwave broadcast from a megalith interfering with the pastoral of an imaginatively recovered radio 4 documentary. The work is always subtle, carefully crafted and well informed by esoteric interests. 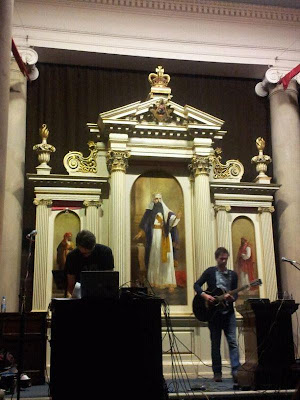 Dean and I delivered a deconstruction of the forthcoming English Heretic offering Anti-Heroes. Slowed down and Masonically blue tinted loops of Dr. Terror's Tarot, the louche boudoirs of Taste The Blood of Dracula and the woodland coven of Angel Blake serve as the backdrop. Between extracts of our anthology of Black Plaque recipients along the Bath road, we play pared down versions of the tracks on the next album: - from  a gothic version of Hell's Angel Blake, with Sarah Sparkes' invocation of Behemoth and Bela Lugosi's Dead bass line to the electro-poem mashup of Ballard's "I Believe" and Lovecraft's "Fungi From Yuggoth". 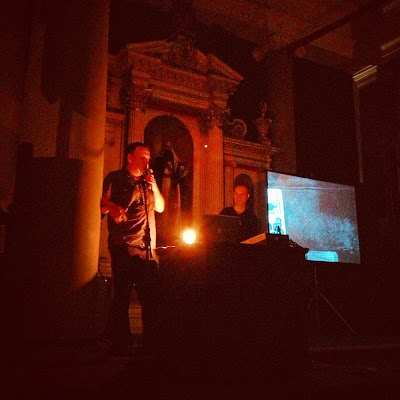 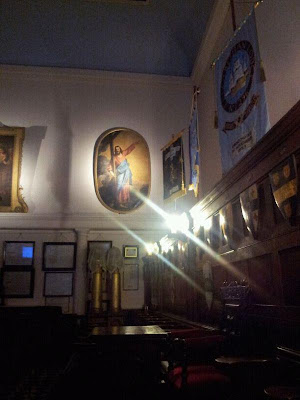 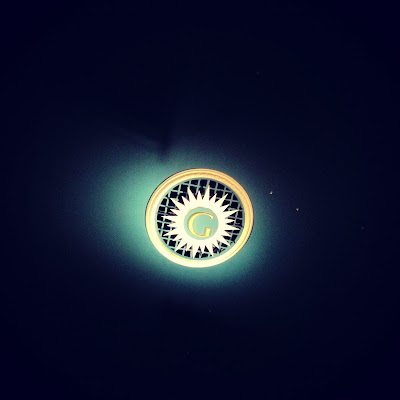 The claimants alleged Davidson pulled out of a deal to pay them for their share of the patent ownership. The judgment says it is clear from correspondence "they were willing to give up their shares in Easyrad for a global compensation in the region. plumbing claremont