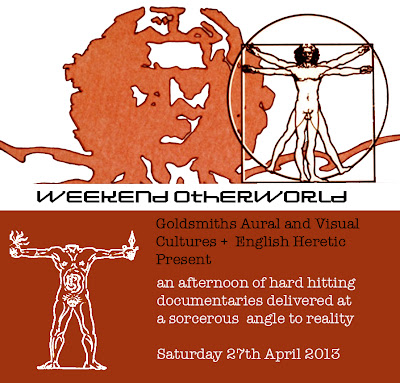 We're delighted to be invited to collaborate with the Aural and Visual Cultures department at Goldsmiths to present an afternoon of talks, films, readings and sound pieces on Saturday 27th April.


Weekend OtherWorld aims to realise a new form of aesthetic broadcast. It imagines a parallel present where the forensic documentary intensity of 1970s television, evidenced in World In Action, Man Alive, Weekend World and Chronicle still exists but at a sorcerous angle to reality. What if the earnest authority of these programmes could be extended to occult aesthetics. With hard hitting, convincingly paranoid reports of the concrete irrational, Weekend OtherWorld subverts the roundtable format of the current affairs programme to broadcast a series of films, presentations and concomitant discussions from a potent broth of hermetic psychogeography, revolutionary sacrifice,  aesthetic psychopathology and eerie capitalism.  Distilling the essences of the recent AGM, the afternoon programme will further attempt to define these new breeds of creative research. By exploring reality at a sorcerous angle, might we also find that the machinery underlying politics and culture is a magical construct?

Programmes:
1.00pm The Actophile Society
Haunted Shoreline, Antony Clayton
The South Bank Show recast as a cultural occult documentary on the applied surrealism of an hermetic beachcomber along the Sussex coast and a memoir the final days of Aleister Crowley by the sea. Actophiles are creatures that love the beach, and The Actophile Society can be construed as  Bataille's decadent cult of L'Acephale on holiday in Brighton and Hastings, searching the shoreline for mineral truths and revelling in the memory of wickedest man in the world.

2.00pm Cinema and its double
Mark Pilkington, Will Fowler, Hannah Gilbert, Alison Gill
Cinema and its Double will explore the intersection of horror film location, urban legend and folklore. Do the myths imposed upon a place by its representation in film create or feed from new and existing realities? Can this be seen as a form of geographical vampirism in itself, a magical ripple in the space time continuum, or more sorcerously a means of opening up a fault line in its contours – to cut-up and collage reality and let the future leak through?

3.00pm Woman's Hour
Blue Firth, Cerys Thomas
Join us for a live UNwomans's Hour, exploring the darker side of the fairer sex (musically)

5.00pm Aesthetic Psychopathology
English Heretic, Ken Hollings
English Heretic – Anti Heroes: Imagine the slightly salacious Man Alive series, car jacked by Crash's Dr. Vaughan. A road movie of English Heretic's forthcoming album and book. Easy Rider on the M4 corridor of a pathological ambulance chaser, Anti-Heroes celebrates with morbid relish the suicide cult of Psychomania, the nihilism of George Sanders, the sleazy intersection of JG Ballard and Peter Wyngarde. Necromancy and pop culture collide in the fast lane to create a casuality list of self sacrificing warlocks and paranoid would be assassins. A portmanteau of Black Plaques, where the ghosts of the Fool wonder forever in Slough's grey zone.

Ken Hollings – Psychoanalysis Of Trash: Imagine Antony Clare's maudlin In The Psychiatrists Chair hosted by JK Huysmans? A session of decadent psychoanalysis, but also a profoundly cogent argument illustrating the inevitable self-destruction of the child-king. Taking in the lives and  tacky luxuries of Prince Rudolph, King Ludwig, Michael Jackson and Elvis Presley, Ken demonstrates a reverse alchemy in their demises. The Kings may not die, but they do gradually decay into the empires of their excess. They do, also, like the angels of some lurid occult system display a common set of correspondences - a love of artifice, an asexualisation to the point of infantilism, retreat, military fetishism and the power to indulge every parameter of their self-disgust.

6.00pm Revolutionary Sacrifice
John Cussans, Lisa Cradduck, Roberto N Peyre
Including The Pomba Gira working: a compelling journal of John Cussans and Roberto Peyre's recent collaborative work for Plastique Fantastique's "There is not and never has been anything to understand" show at ASC. A delicious picaresque and diasporic journey taking in the Crossbones graveyard at Southwark, pimp aesthetics and the occult use of talcum powder in the rites of Northern Soul: pure voodoo poetics.


7.00pm Horror Capitalism
Mark Fisher, Dean Kenning, Savage Messiah, Nicola Woodham, Tristram Adams, Carey Robinson
Explore attempts to create a new genre of documentary of Horror Capitalism. Short Films and collage as de-indoctrination rites.
Including:
Dean Kenning – Prospect for Growth (film), A situationist subversion of the party politcal broadcast. Biological education loops pulse like a 70s psychiatrist's hypno-wheel, a map of England infests with maggots as divisive political diatribe heckles over a  high pitched siren. A 5 minute warning for the immediate future.
Eerie Anglia – Unvisited Vastness (film). England as the alien planet. Combining field recordings from Felixstowe with Mark Fisher's prose poem  - a hymn of a vague disease. Unvisited Vastness attempts to remove humanity from the container port, recasting the space as the speculative hinterland of some recent and unfathomable invasion. Eerie Anglia will also premiere the report of a Communist uprising at Shingle Street, Black August.
Nicola Woodham - The Gift Experience (vocal performance and soundtrack)
Car radio in the distance: a news report is brought to you in fragments on the shifting current of the wind. The threadbare words get louder as you approach the warehouse. You’ve brought a votive candle and a cuddly toy elephant. The others come into focus, they are waiting for you. A host of characters tell a story that starts with an anomalous algorithm within the workings of an electronic commerce giant. A cult springs up - devotees of impossible spaces.
RO/AD (Carey Robinson, Tristam Adams) - As Sonorous Murmurs Rise (10 min sound performance)
Explores the elusive ‘grain’ of the voice; the parts that hold a libidinal energy, a vo-corp-aural energy traded in service industry, media and music. Taking Jean Francois Lyotard’s visceral prose from the 1993 translation of his Libidinal Economy essay as a starting point, the piece trades upon the aesthetic of Autonomous Sensory Meridian Response (ASMR). The ASMR aesthetic is explored and renegotiated to question the preconceptions of such seemingly innocuous sounds. The hope is to conjure an intense vocal undoing; a tangibly sonic and performative deconstruction of voice that may be peculiar, strange or even horrifying. It is in this sense that notions of libidinal vocal capitalism and the traditional apportioning of subordination and domination within service intonations are deconstructed. Framing the narrative will be soundscapes compiled from Carey Robinson’s archive recordings.

tickets or just turn up on the day?

hi entry free, just turn up on the day

Best of luck with this. The whole programme sounds brilliant.
I'll be there in spirit.

I'll be thetre and I'll bring Brighton beach with me (spectrally speaking)...