The Alchemist of Saltdean 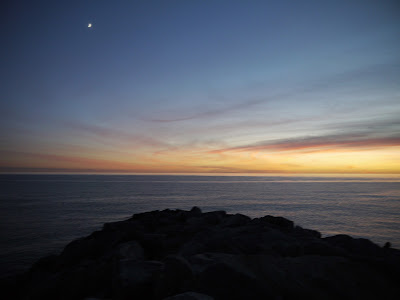 Last sunday I visited Haunted Shoreline and was given a wonderfully profound tour of his exoteric laboratory - the beach at Saltdean. At dusk, the sun set on the right of the horizon and a crescent moon hung on the left, creating a perfect hermetic backdrop for Haunted Shoreline's careful observances of the possible mineral residues that may have been washed up at the last tide. The ocean trench is the alembic, the sea its universal solvent. 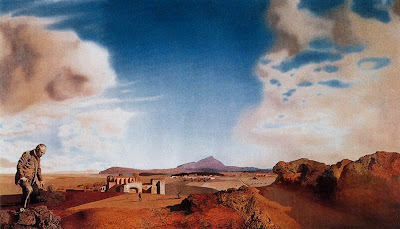 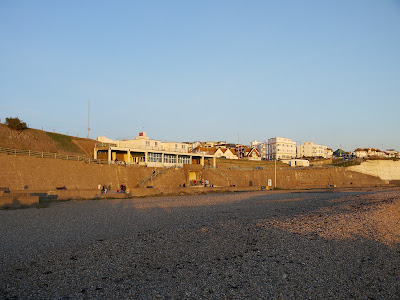 Without exception the most enigmatic "hand painted photograph of the concrete irrational" in Dali's canon is for me The Pharmacist of Ampurdan Seeking Absolutely Nothing. In it, a Freud-like figure stands on the porous rocks of Cadaques in deep rumination of his mineral terrain, in the distance a suburb of the painter's paranoiac-critical town. It stuck me that Haunted Shoreline is performing a similar operation to the figure in the painting, re-casting the venue to the beach. There's also a decidedly English form of natural history surrealism in the venture - from the Swanage of Paul Nash to the oozing oedipal album sleeves of Steven Stapleton. 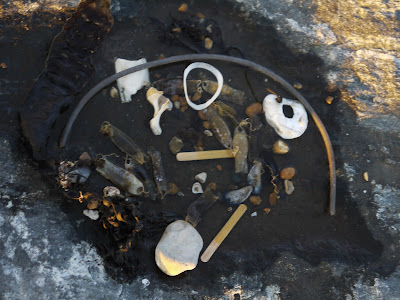 As if to give currency to this hypothesis even the rock pool flotsam takes on the appearance of a Merzbild; a construction of lollipop sticks, kelp and skull white stones. But the rock pool also looks like some kind of gelatinous veve or the squirming magic circles of Giodarno Bruno. It was supposed that Bruno constructed particularly sinister talismans where worm like creatures were deliberately depicted invading the sanctity of the circle's circumference. An heretical attempt to invite possession and mania. Discussing the method of Haunted Shoreline's post-laboratory inferences, we talked about the perils of pure psychic automatism and the need to constrain the extrapolations of irrational discovery. So it's likely that the alchemist of Saltdean is seeking some thing with each ritual visit to the shoreline. An object - the thing, singular - but imbued with the plural, the "some" - an object to be ratified, rarified and poeticised, in other words "raised an octave". 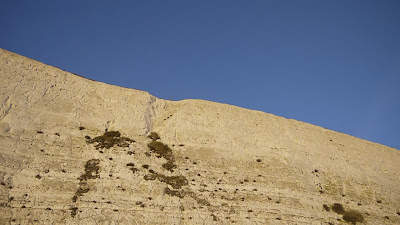 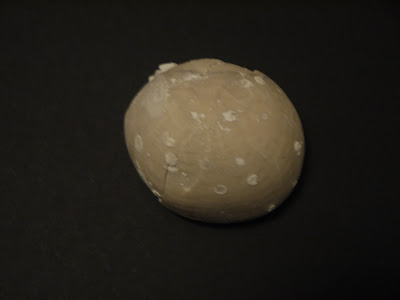 The chalk of Saltdean provides offerings too - a white prima mater. The cliffs which gave rise to Albion are formed from the aeons-crushed skeletons of minute plankton. As Haunted Shoreline testifies the bone hunters spend as much time facing away from the sea, scouring the cliffs for booty and in a kind transaction he reports they offered his daughter the gift of an ouroboros - cloaked in the guise of a fossilised sea urchin. 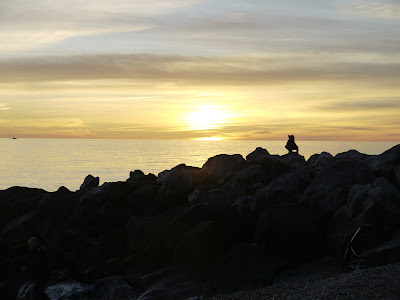 As evening drew in, the figures of people climbing the rocks became increasingly silhouetted as if formed or forming from the rocks beneath. Perhaps this is the clue to the enigma of Dali's Pharmacist - is he a double of his landscape?  Did Dali spy the figure of Freud in the sediments of Cadaques and conjure the suited humunculus using his paranoiac critical mediumship? At one point I noticed a child crouching on the rocks, wearing a jester styled bobble hat, it looked like some kind of golem. The golem of Jewish mysticism is an anthropomorphic being entirely composed of inanimate matter. In Jungian alchemy, the humunculus is supposed to have first been documented in the visions of Zosimos, a self-mutilating orobouros, but also a golem - half sentient and tortured by his own existence. The golem, in Rabbinical tradition, is kept alive by the Hebrew inscription for Truth [emet] which is it wears on its head. To destroy a golem and return it to dust, you need to merely remove 'aleph' from the letters on its head to render the word for Death [met]. Later, in Haunted Shoreline's garden we talked about the influence of Gurdjieff's dictum of "Life is real only when Iam". It is an aphorism that puts truth at the pivot between life and death. The alchemist, one who raises the octave, in Gurdjieffian parlance, is also distilling the essence (or truth) by the iterations of his Work. 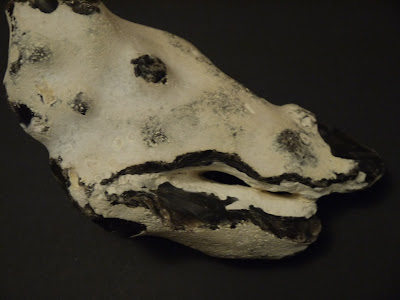 The psychopomp responsible for initiating Haunted Shoreline's nekyia to the beach at Saltdean was Anubis - revealed in the form of a rock shaped like a Jackal's head and discovered at the end of December 2011 on nearby beachy head. The underworld of the Egyptian is also a psychoanalytic voyage, Dali's psychopomp is Freud - the unleasher of the painter's lurid subconscious, but the journey to the underworld can be construed as an hermetic undertaking - an argonaut, a voyage of linguistic entendre. The ceremonial donning of the phrygian cap by the alchemist in his laboratory is a ritual cue signifying that he is now looking for the philosopher's stone. In fact the child on the rock is now less wearing a jester's hat... There is a curious doubling here too, of Dali's Pharmacist and the carving of the alchemist that Fulcanelli discovered at Notre Dame Cathedeal. Both can be seen to be adopting the ritual posture of intense investigation. 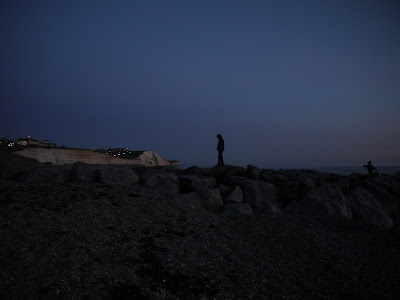 The given ancient of the mineral world trivialises our neuroticism - the calcium in our bones is as old as the universe - but it is also important to realise the neurotic complex is merely a parallax view of our possible futures, and it's critical that we apotheosise our early seizures to give us the hope that we can be mythmakers too. To a degree this is what Dali was doing, though Ernst is more explicitly self-aware of the necessity of amplifying the narratives of the childhood - of raising the octave - the birth of his sister coinciding with the death of his beloved parrot to create the bird-bride hybrid of his delcalcomaniacal masterpieces. 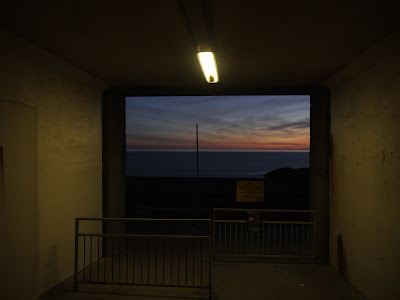 Every nekyia needs its hypogeal ramp and the beach at Saltdean is reached by a tunnel cut into the cliffs. The shallow descent through the tunnel gives Haunted Shoreline's perambulations a magical imperative. The beach is cut off from the mundane. As we left the beach through the tunnel, a sign above the entrance showed the numbers 902. Asking me of the qabalah, I pointed out that it is of course 11, the number of the Daath, false sephira of Grantian lore and the 11th letter of the alphabet which gave Crowley his high strength magick with a K. Perhaps that Phrygian cap is also the hat of the Tarotic fool on the 11th path. Virgin's Milk, the philosopher's stone, all absurd paradoxes, impossible miracles. 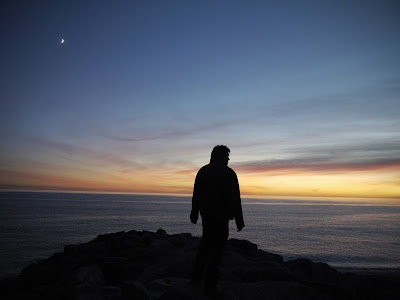 As an adjunct to my visit, a video documentary is in the making which will feature extracts from a fascinating interview conducted following the walk... more on that as it happens! 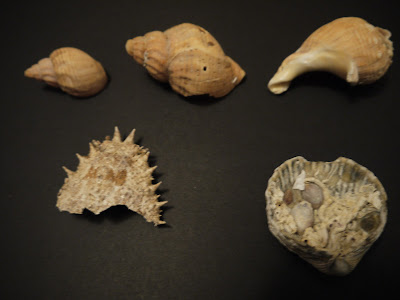