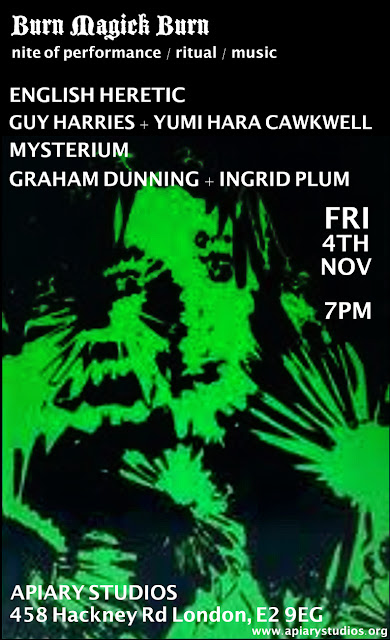 
DOORS 7PM
FREE
Curated By Kevin Quigley
BURN MAGICK BURN is a unique evening of performance that brings together a series of artists / performers to explore the boundaries between performance, music and ritual. Coming together under the cloak of Fire magic Ritual in conjunction with the sacrificial  bonfire weekend the artists will present new performance works evoking the sprites and imps of fire!
- expect an evening of spine chilling immersive enchanted music -
ARTIST DETAILS
ENGLISH HERETIC
English Heretic Present: Burnt Out – Fire Sermons, Fire Summons

Tonight English Heretic explore the Buddhist concept of The Fire Sermon in the context of its Black Plaque recipients. The Fire Sermon – a metaphor for the burrning nerves of complete psychic capitulation epitomised by the suicides of Michael Reeves and Robert Cochrane; the schizophrenic Ian Ball’s act of royal treason. The Fire Sermon was made popular in the West by TS Eliot’s Wasteland. In 1925, Eliot wrote the Hollow Men, an allusion to the straw effigies of bonfire night, an allusion to his own mental breakdown. More frighteningly, did Michael Reeves summon a curse upon the village of Lavenham by filming a witch-burning scene in the medieval village during the making of Witchfinder General? Actor Ian Olgivy described the mood in the village following the witch-burning scene:

“…There was an element of spectacle there and it was curious that the next day several inhabitants of Lavenham who had taken part in it and lived around the square, said ‘You should have heard the clanking and the crying and the screaming last night’. That we’d woken a lot of the ghosts up. And they were quite serious about this. ‘There was a terrible, awful noise of wind, screams and moans’. It was strange”.

Shortly after completion of the film Reeves dies in a suspected suicide. In 1969, Sharon Tate, the wife of Roman Polanski had a role in the film The 13 Chairs, a comedy horror, interior and exterior scenes of which were shot at Lavenham. In 1970, John Lennon and Yoko One filmed their experimental movie Apotheosis above the snow covered fields of Lavenham and in 1971, Pier Paolo Pasolini directed The Canterbury Tales, which used the Suffolk village as the location of medieval London . The 13 Chairs proved to be Tate’s last film before she was brutally murdered by members of the Manson Family. In 1975 Pasolini was senselessly beaten to death by an acquaintance on the shores of Ostia, and in 1980 Mark Chapman gunned down Lennon outside the Dakota buildings in New York.

mysterium players for this performance are -

GRAHAM DUNNING
Is an artist/musican and his working practice deals with temporality, memory and narrative through sound, performance and installation.
He is interested in people’s discarded memories and the function of archiving. Found objects, photographs and recordings feature in my work investigating notions of the artefact and implied narrative.
INGRID PLUM
Is a Danish-born Artist living in the U.K.Her work mainly consists of installations using video, sound, sculpture and live performances, often involving a spatial arrangement of screens,monitors and objects to create dialogues between visuals and the spaces they are shown in. The imagery filmed focuses on unnoticed, accidental phenomena that occur in our everyday environment, sometimes recreated in a studio or filmed on location.
back
Posted by Dr. Champagne at 16:25